The discussion about structural racism in our schools often centers around Black student achievement and school discipline. Whether we call it the “achievement gap” or the “opportunity gap”, we often focus on Black students who are not doing well in our education system.

According to a USA today report citing data from the Department of Education:

From gifted-and-talented programs to teacher experience to advanced science and math courses, the data show, the schools that enroll large numbers of minority students are unequal in nearly every way.

To be young, gifted and Black…

But what about the Black students who are already overcoming the odds? How are they doing?

As the Black students from elite schools across the country testify, it’s STILL hard to be young, gifted and Black in our nation’s schools.

And San Francisco is no different.  At SF’s prestigious Lowell High School, one of two, magnet schools in our city, and the oldest high school west of the Mississippi, Black students make up only 2% of the student population, as compared to 9% of SFUSD’s overall student population.

Not only are students underrepresented at the school, they often face daily microagressions. Last year, Black students staged a walkout when a student posted a racially insensitive (read: racist) display in the library mocking Black History Month. 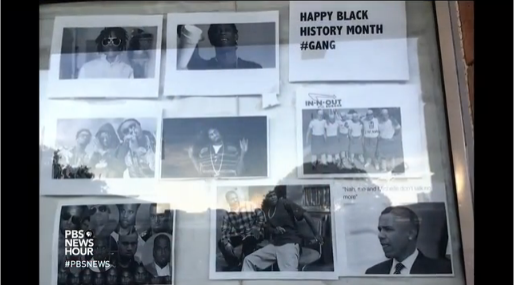 It’s disheartening to think, that after 40 years, Black students in our elite public schools are still expressing a need for cultural visibility and “safe spaces” on campus. As Tsia Blacksher, a Lowell senior states in a report from KALW:

“Being black at Lowell is a struggle. And for them [referring to the Black Alumni speaking about starting a Black student group] to be talking about the same things that we’re going through now is kind of eye-opening. Because it’s kind of like, where was the change? What has happening in the past to where we’re like in the same position that they were in 40 or 50 years ago.” – Tsia Blacksher, Lowell senior

[Listen to the full story here.]

Lowell students are not alone in criticizing educators for not doing enough to eradicate a culture of racism in their schools. Across the bay, students at Berkeley High School shared their experiences in the school’s elite Berkeley International High School program (BIHS), a predominantly white program at Berkeley High School. Students of color in the video speak about isolation, having to “speak for their race”, feeling like outsiders in such a white space.

When students of color speak about wanting to LEAVE the program they were meant to integrate it is notable. Unfortunately, even when students speak up, the response is less than awe-inspiring. Lackluster is more like it.

Boston Latin students Meggie Noel and Kylie Webster-Cazeau gained national recognition when they launched the #BlackatBLS campaign via YouTube video, In it they detailed the daily microagressions they face while trying to get an education. Several months later, after an investigation by the school district’s Office of Equity, as well as a separate investigation by the Civil Rights Unit of the U.S. Attorney’s office, they were still not impressed.

These examples show that even when Black students excel, they still struggle to be treated like valued members of their school communities.

Young, Gifted and Black: What are we doing about all this? Apparently, not much.

Unfortunately, it doesn’t look like it’s getting any better soon. If protests like Lowell and Boston Latin’s BSU (Black Student Union) students have elevated awareness about racism in our elite schools, the resulting conversations often center around Whiteness.

This PBS report is a great example. The story, titled The daunting struggle to diversify elite public high schools, attempts to discuss Lowell’s problem attracting a racially diverse student body. Unfortunately, like many stories bemoaning the lack of representation in our elite schools, the report shares problems but places it on the backs of children.

The reporter, a former Lowell parent, knows a lot about this topic (Well actually, not really). In his expert analysis as a White male, the reporter spends most of his time highlighting a wide array of questions focused on”minority” problems which include: home problems, resilience problems, lack of preparation problems… These are all coded ways of blaming black youth and families.

The one bright spot of the report comes from Micia Mosely a comedian, educator and founder of the Black Teacher Project states:

“By nature they are exclusive so how do you have diversity inside of a system or organization or school that’s designed to shut people out. We’re asking things of schools we are unwilling to do ourselves.” 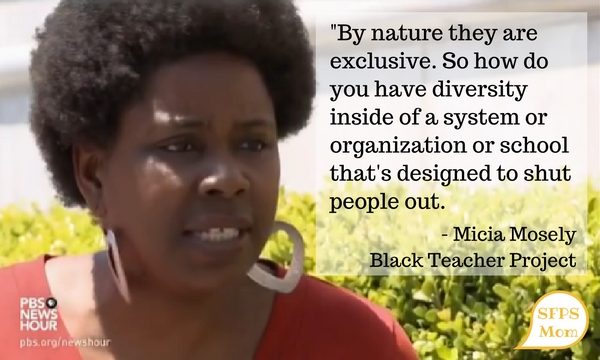 Former Superintendent Carranza echoes these sentiments when he asks, questions about what elite schools are doing to make Black students feel welcome. What the former Superintendent is alluding to, is the fact that both teachers and parents at Lowell don’t just express implicit bias through microagressions here and there, they have and are actively perpetuating racist narratives about Black students and families in an effort to maintain the segregated system they’ve worked so hard to get themselves into.

I mean, what good is getting into an elite public school if you can’t be better than everyone else who didn’t get in?

Young, Gifted and Black: Back to the future

Using Lowell High School as a case study, it is easy to see how 50 years later, the story at Lowell and other elite schools has remained the same… 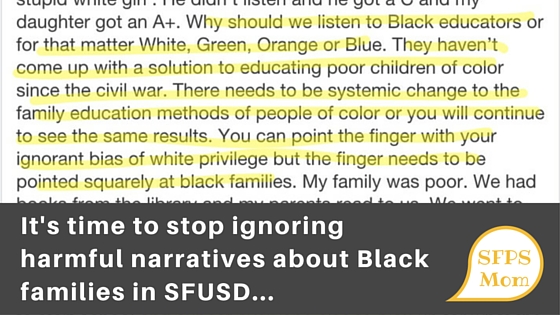 According to these folks… the fact that the current president of the Lowell PTSA (Parent Teacher Student Association) has expressed that “the finger needs to be pointed squarely” at Black families (see above) for their lack of parenting, has nothing to do with anything. The fact that his statements are widely known, and yet nothing has been done to challenge his leadership, has nothing to do with anything. The fact that many Lowell students are expressing resistance to making ethnic studies classes mandatory (as was proposed by BSU students there.) Neither does the fact that Lowell parent leaders have worked with staff for years to undermine the district’s Common Core math sequence, which effectively eliminated racially segregated tracking via GATE and math courses. Or the fact that the Mayor has miraculously found $70,000 at these same parents urging, to pay for private online math courses (vouchers?) so their kids can resegregate themselves despite the district’s policy…

Nope… that wouldn’t have ANYTHING to do with anything…

Young, gifted and Black students offer proof that it’s not Black culture, or Black parents or Black kids that are the problem with Black achievement. Because even when Black student follow all the rules, and beat the odds to gain admission into elite schools they are still told, in both subtle and sometimes overt ways, they still aren’t welcome there.

Young, Gifted and Black: Don’t just sit there… Do something!

What is your school or district doing to ensure students are welcome? What are you doing as a student or parent to make your school more inclusive to marginalized students?