When Silence is the Price of Admission: The Problem with Diversity

Recently a fellow blogger and Tulsa, Oklahoma area teacher, tweeted me a video (Thanks, Blue Cereal Education!) of a great speech given by Professor Osamudia James of Miami University School of Law. In her speech she tackles the issues of segregation, visibility, identity and connection and clearly defines the problem with diversity. Please watch it BEFORE YOU CONTINUE reading below.

It’s powerful when someone finally reframes your experience

Watching the video was a very emotional experience. Professor James’ speech validated not only what I witness each day in schools throughout our city, it reflected my own personal experience as both a student and educator.

If you are a follower of this blog, you know that I write A LOT about the intersections of race, education and parenting. In this vein, I have often touched on topics such as tracking via gifted and talented programming and math placement, school “choice” in relation to racial segregation in our schools, and positive visibility for Black culture in school libraries and cultural events.

As I discuss these issues, it has become painfully clear to me, that the conversations all of us have been having around diversity are in some way a part of the problem. I mean, if diversity programs that were spearheaded 20 years ago were so successful, why is our country still struggling around topics of race?

Professor James hits the nail on the head when she defines the problem:

Boom! I felt her words in my gut. 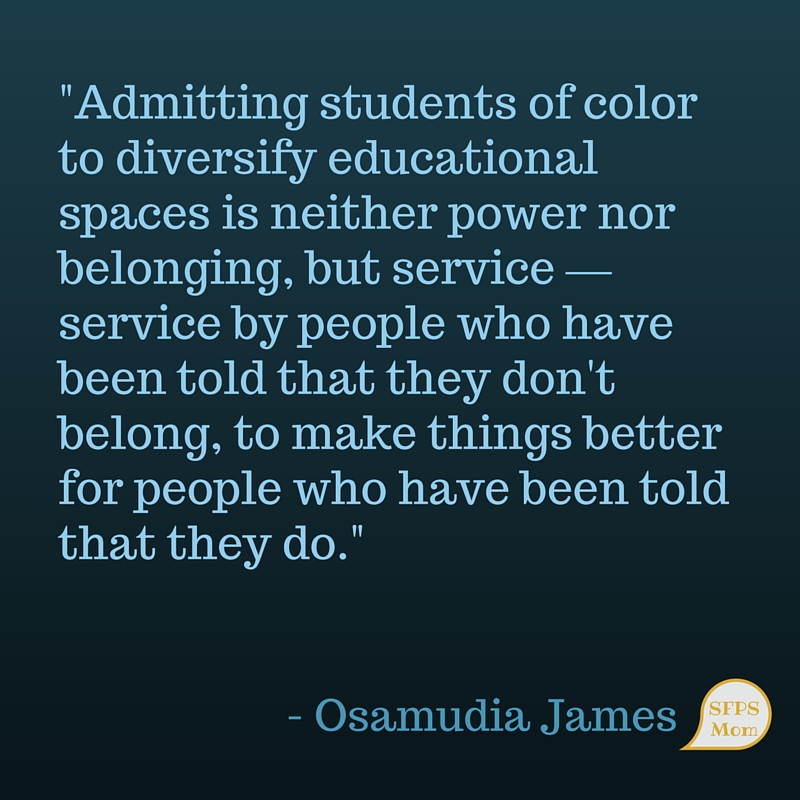 It’s not just about diversity, it’s about inclusion. Integration schools don’t mean squat if students are still segregated via tracking. Diversity is not beneficial if low-income, Black, and/or Brown kids and families feel they must diminish who they are in order to participate.

My first year at the University of Pennsylvania, an Ivy League university, was a culture shock to say the least. Growing up as a mixed-race (Black/White) Los Angelina, attending mostly Asian and Latino schools, my race never seemed relevant. Nonetheless, once I went to college and started being called “ethnic”, “exotic” and even “organic” (?!?! … yeah… I can’t answer that one) I started to realize that even though I didn’t think I was different, everyone else DID, and it wasn’t a good thing. My experience got so bad, I started calling myself “diversity at Penn”… the slogan emblazoned on college brochures and other promotional materials at that time.

Looking back, I LOVED my professors and my classes. I loved the ivy covered walls, the library, the snow (!) and all the history. I didn’t come to college with any hang-ups, or a chip on my shoulder or anything to prove. I was a shy, light-skinned, mixed-race/Black girl with middle class, college-educated parents who listened to the Cure and “talked white”. Nonetheless, despite the fact that I was assimilated in almost every way a Black person can be assimilated, every day I was told in no uncertain terms, I was different, and my difference was not OK. (I can’t even imagine how difficult it must have been for students from low-income backgrounds, or those who were the first in their families to attend college.)

As it was, I was too white to join a Black sorority and not White enough to be a part of any other peer group. By my sophomore year I grew so depressed I considered dropping out of college. On the urging of my parents, I ended up transferring to NYU, to only have similar experiences there. I am still surprised I was eventually able to graduate.

All my life, I blamed myself for my inability to fit in. I felt remorse and self-loathing when I thought about my college experiences. Why did it seem so easy for other students? What was wrong with me? Why couldn’t I make friends?

Professor James’ succinctly puts a lifetime of experiences into a few simple sentences when she states:

“The price of my admission to white spaces has been silence. But, as a lawyer I know that the law continues to conceal the injustice that there are two options people of color are still given in our country. The first, is the demeaning and confining option of segregation in black and brown spaces. Or the second, service but never true belonging in white spaces.”

I am not someone who can remain silent — I have always felt compelled to name what I see. This has been a gift and a curse at times. I’m not stupid. Like many Black folks, I can read the writing on the wall. I make connections. I see the disconnect when people say they value Black culture while dismissing Black voices and perspectives. (Not “looking Black” has also placed me in situations where I get to hear what White folks say about Black folks when they think there aren’t any around…)

When I was a student and a young teacher, the “bootstraps” mantra was the only song on the radio, and it played, and played and played. (That and “We are the World” as sung by a lot of White people.) Even with the summer race riots of the early 1990’s in Los Angeles and New York, none of my teachers or peers seemed willing to talk about race outside of abstract, decontextualized ways. There weren’t terms like microagressions, intersectionality, whitesplaining or tone-policing to help me articulate what I was seeing. And being the “only Black person” in most of the educational spaces I studied and taught in made it easy for others to dismiss my voice.

What did I say?

At this point, you may be wondering… what awful things did I say to elicit such strong reactions? Any Black (or Brown) person can tell you how outrageous even noticing race can be. Here is a sampling of questions I’ve asked along the way: 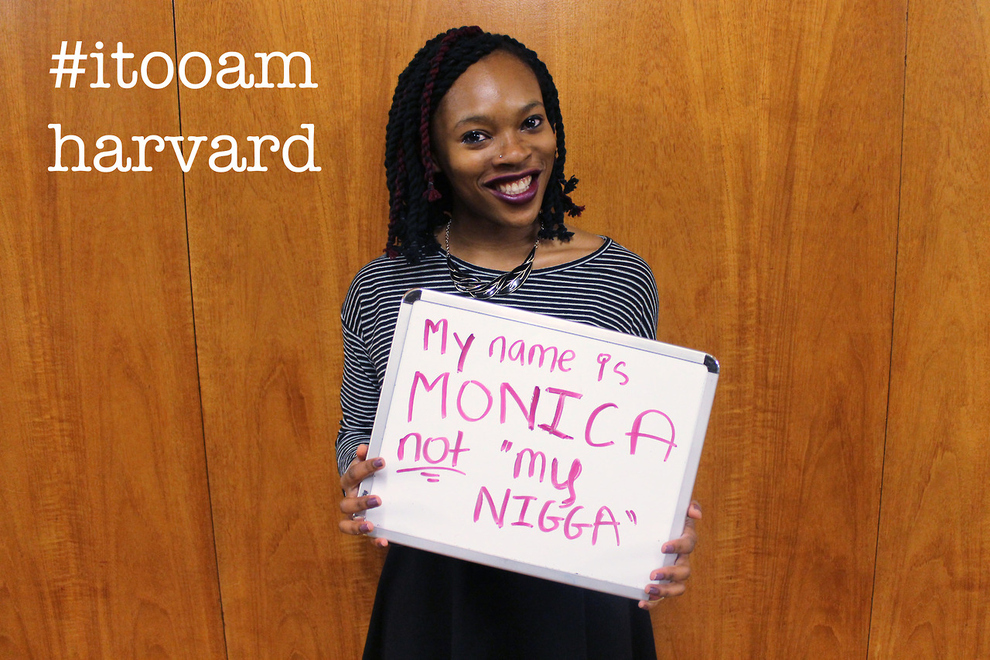 I have been so grateful for #BlackTwitter and #BlackLivesMatter activists and scholars who are using social media to put questions like these and others on the table. Websites and bloggers (see BlackGirlNerds, Blavity, For Harriet, The Jose Vilson and Mamademics) are also creating visibility of a Black experience that is more nuanced than the “ghetto” vs. “respectable Black” tropes celebrated in mass media.

More and more, our youth are leading the way. Black students at esteemed universities such as Yale and Harvard and “exclusive” high schools like Boston Latin and our own Lowell High School are speaking up about the daily microaggressions they endure trying to get an education. Once they graduate, they often continue to deal with problems of service and belonging well into their careers. One only has to look to Silicon Valley for recent examples. (Read this great article on being Black at Twitter.)

Speak up, be heard, connect…

There are many things I DISLIKE about growing older: grey hair, back pain, an inability to “party like I used to”… but there are also many benefits. If being over 40 (and having cancer two times) has taught me anything, it’s that life is too short to remain silent. With all this on my mind, after seeing Professor James’ speech, I pushed back on the negative feelings from my past and reached out on Twitter.

Not only had Professor James’ work inspired me, it had inspired a conversation…

When we refuse to be silent, the antagonism and exclusion are real.

This is what makes it bearable, isn't it? https://t.co/y6hlwhpRcP

Speaking up has never been easy, and there are often very real consequences for breaking the taboo of talking about race. Nonetheless, staying silent, is what keeps white supremacy firmly in place. And that is NOT something I aim to do. When we silence ourselves we become complicit. Additionally, we disconnect ourselves from each other and our ability to share resources, ideas and support.

As I continue to speak out, I find my voice can amplify the voices of others. It connects me with a larger community I now know is out there beyond the ivory towers of education, a community that like me is waiting to be heard.

One thought on “When Silence is the Price of Admission: The Problem with Diversity”