I am so tired of hearing about “individual virtue”, “bootstraps”, “personal responsibility”, “merit”. It is NOT enough. My father was able to move up, because his grandmother got wealth from her parents who were able to buy property in a white suburb of Saint Louis. They were the only black family for miles around.

This gave my family “asset” wealth, which allowed my father, the child of a maid and a janitor with no more than 8th grade educations, the ability to go to college and eventually move my parents into the middle class.

If you grew up in the 70’s and 80’s and are white and your parents owned their own home, you are a beneficiary of white privilege. You received a benefit that most Black Americans did not receive due to discriminatory housing policies.

Ta-Nehisi Coates, author of the new book Between the World and Me, talks to Charlie Rose about why he feels that the idea that “individual virtue”, or personal responsibility, in the black community won’t erase the effects of generations of discriminatory policies.

Coates personal experience bears out in statistics on wealth and home-ownership by race. This article by SPUR (a nationally recognized nonprofit that promotes good planning and good government in the SF Bay Area through research, education and advocacy) cites authors of The Racial Wealth Gap: Why Policy Matters who explain how systemic housing discrimination has played out on a national scale:

How has redlining played out in California?

These interactive maps below from a recent KQED article, How Redlining Maps Encouraged Segregation in California’s Cities, show how San Francisco (and other California cities) have seen the lasting impacts of redlining on our cities: racial and cultural segregation in where we live, work and go to school, and who has had access to property ownership.

You can see from the map of San Francisco how Bay View and Mission neighborhoods are marked “red”, as in BEWARE!!!! 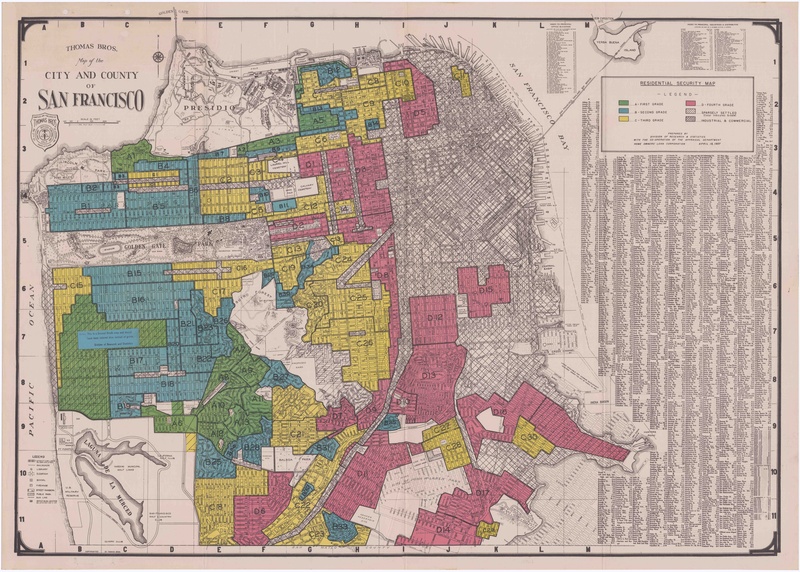 According to the map legend:

Guess which areas had Black and Latino folks living in them…. :/

Thankfully, the times they are a-changing. According to the KQED article:

“In a 5-4 decision, the High Court ruled that even unintentional housing discrimination violates the Fair Housing Act. Homeowners or renters, it stated, can file suit against government or private housing policies without having to prove the intentionality of the alleged discriminatory action.”

This means BIG potential changes in how the federal government. According to the same article by SPUR:

“The ruling will allow plaintiffs to challenge decisions about where federally funded affordable housing is sited on the grounds that the decision is discriminatory — without having to show evidence of discriminatory intent or motive. Instead, the plaintiffs can show evidence that the location of the housing can have a disparate impact on the lives of the residents. Given significant research published recently on the impact that neighborhoods have on life outcomes, the ramifications of this ruling could be profound.

Justice Anthony Kennedy, writing for the majority, noted that not only did the Fair Housing Act of 1968 ban outright racial discrimination in housing, it also required government agencies to dismantle segregation and foster integration.”

With the new ruling focused on IMPACT rather than INTENT, the federal government will now be able to challenge affluent neighborhoods and suburbs that in the past have resisted building new housing, let alone affordable housing.

Does any of this make sense to you? How has redlining impacted your families ability to access the “American Dream? How might your family have benefited from discriminatory housing practices? Share your thoughts in the comments below.