Why I Love My Blackness, and Yours…

These past few weeks have been beyond rough. With the almost nonstop brutalization of black bodies on social media and the news, getting out of bed and taking care of my kids has been about all I have been able to do. But, after days of focused self-care, I feel I’m finally starting to make my way out of despair.

Can’t We All Just Get Along?

It seems I’m not alone in my desire to find the light at the end of the tunnel. More and more, I see images and videos pop up in my Facebook feed of Black people hugging cops and White cops holding flowers. All the while, in my mind I hear the refrain, “Can’t we all get along?”

If you are old enough to remember the LA Riots (another protest against police brutality) and Rodney King’s request to “get along” you will also remember that the answer to that question is a definite… NO. At least not until we get serious about creating REAL justice in our country. (Sorry, hugging just isn’t getting it done, people!)

Needless to say, a cousin of mine recently posted a video, which makes the case that we should basically, well…. just stop being all about race and “get along.”

I am NOT Black, You are NOT White. is a video of a spoken word poem. It starts with the headshot of a Black man saying, “I am not Black”. His voice continues as people of other genders and ethnicities lip sync his words as he shares some really “deep” wisdom (based on the rising crescendo of violin music in the video) challenging ideas about race. Near the end, there is also a really cute Black baby kissing a cute White baby (I mean seriously, even I almost cried!). Then, everyone, Black, White, Asian, Muslim, men, women (you get the picture) all appear at the end to tell us we need to get over these racist “labels” and love each other.

In summary: Race isn’t real. We are all the same inside. Labels are bad. Labeling ourselves by our differences (aka: race) causes conflict. Conflict causes war. War is bad. Therefore, identifying by our race is causing war. So, to stop all this war and hate, let’s stop calling ourselves Black or White, and just love one another and be free!

We Can’t Solve a Complex Problem with a Quick Fix

Look. I get it. My heart LITERALLY aches over the recent police killings of Alton Sterling and Philando Castile and the militarized response to Black folks’ repeated requests to STOP. KILLING. US.

I’m tired. I just want this nightmare to be over. I get it. But the medicine we need isn’t more hugs, or prayers, or LOVE… It’s ACTION. It’s changing f*cked up systems that keep racism in place. It’s self-reflection. It’s education. It’s accountability. It’s WORK!

Racism in our country isn’t an individual “bad racist” problem; it is a structural, institutional problem. Our country was founded on the systematic brutalization of black bodies for profit. Our police system was first established to protect the wealth generated by slavery. (This wealth even included enslaved people who were considered “property”). Our prisons were built to replace the free labor by abolishing slavery. If we have learned anything from the recent visibility of police brutality or Trump’s rise in popularity, we have learned White supremacy is NOT a part of our past — it is alive and well in the good ‘ol U.S. of A. It is firmly rooted in our culture through the criminalization of Blackness and the narrative of “good” Whiteness (aka: “good schools”, “good neighborhoods”). It’s in our cultural DNA.

Peddling the colorblind Kool-Aid is misguided. It’s like trying to take a pill to lose weight. It may seem to work in the short run, but over time, it just doesn’t cut it. We can’t hug our way out of over 400 years of systemic oppression and brainwashing through racialized, propaganda, stereotypes and labels. 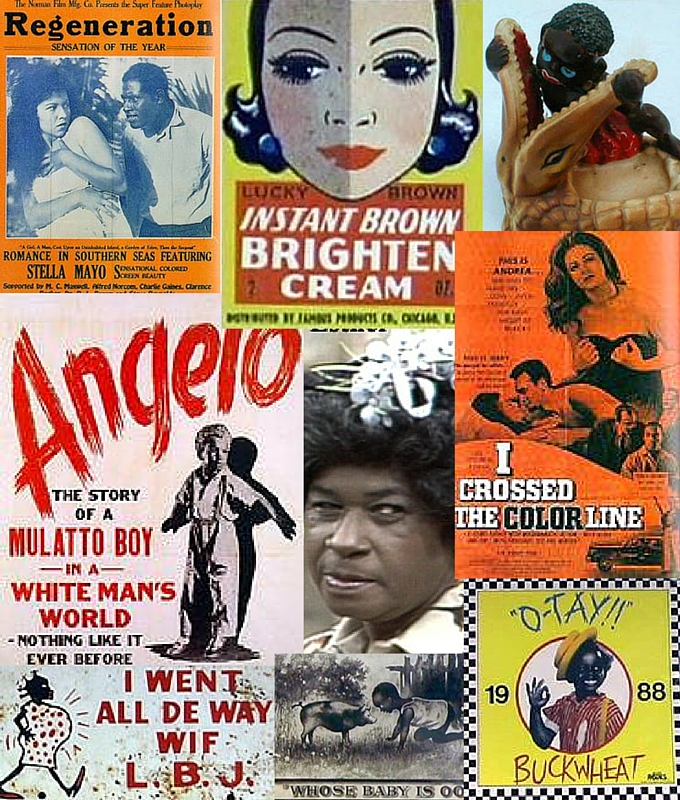 “But, wait!” you may be saying, “That’s what he’s talking about. Labels ARE bad. Aren’t stereotypes and labels a part of the problem?”

Yes! Labels are bad. The problem with this poem’s message is it associates racial identity with labels. And, let’s be clear, they are NOT THE SAME.

First off, let’s get real for a minute. We don’t see each other’s bones or blood, so saying we are all the same INSIDE is silly. We see people as tall, short, blond, brunette, fat, skinny and yes, Black, Asian, or White. That’s not going to change just because we DECIDE noticing these things is “bad.” I’m proud of being mixed and Black. I don’t want to be like everyone else. I like my Brown skin, my wily salt and pepper hair, my long legs. I like being who I am. I’m proud of what makes me unique. And I LOVE my daughter’s grey-green eyes and honey-colored hair, and my other daughter’s mocha skin and mischievous smile. It’s as much a part of them as the way they laugh or cock their hips to one side or give me kisses. They are each unique, irreplaceable, one of a kind.

Difference doesn’t inherently cause conflict—intolerance does.

Difference, in and of itself, doesn’t cause conflict. Noticing eye color or hair color is not considered offensive, because they are not seen as markers of societal status or power. Skin color, on the other hand, is associated with social benefits or stigmas in our culture. Thus, noticing skin color is considered taboo because noticing skin color is directly related to noticing privilege and oppression, which is OFF LIMITS!

We may wish we lived in a colorblind society, but we don’t. Pretending that we can just wish it to be so will make it happen is about as realistic as wishing one could fly. And as dangerous.

We were all born into the world with a role to play. Whether we like the casting or not, the script has already been written and we have been trained to play our parts. White savior, angry Black man, submissive Asian woman… Try to break free and you will immediately reminded (sometimes violently so) that you are going “off script” by society. (For anyone who thinks race “doesn’t matter” listen to this chilling example of why that’s flat our dangerous for some black folks to act unaware of race.)

Am I saying we’ll always be defined by these racist stereotypes? No! In fact, the first step in becoming our true selves starts by examining the ways that we and others define ourselves (and those that we consider “different”) using a critical intersectional lens. Race is a key factor in this analysis.

Being mixed-race AND Black AND a woman, has had a huge impact on how I’ve been treated in this world. It’s molded my experiences, which have shaped my perceptions of the world, which in turn shapes how I think, feel, and act. In the video, the poem uses a metaphor that our bodies are like cars, and just as we would not confuse a driver with a car, we should not confuse our bodies with the people inside. Lets’ play with that analogy shall we? If we were cars, folks born as sports cars would have very different perceptions of the world than those born as minivans, off-road vehicles, or trucks.

Differences can be good. In fact, they can be amazing!

Jane Elliot is the teacher that conducted the famous Blue Eye/Brown Eye experiment (roughly 40 years ago). What she learned during this classroom experiment led her to become a diversity expert. I agree with Jane’s argument that being colorblind actually perpetuates racism. Why would we NOT want to see one’s race, unless we think it’s a bad thing. I love humanity and all the colors it comes in. What’s wrong with celebrating that?

Jane Elliott Says That All White People Are Racist

See a great clip of her on Oprah explaining the ways being colorblind perpetuates racism. (If you want to skip to that part, go to the 9 minute mark.)

Remember, kids who grow up in families that don’t talk about race often learn the opposite of what their parents intend. Instead of learning race doesn’t matter, they learn that race is bad because it’s something we shouldn’t talk about. Think about it, there are other things we don’t talk about: sex, drugs, death…. get the picture?

Instead of trying to peddle the “we are all the same” mumbo-jumbo of diversity (which hasn’t worked BTW or this whole race problem would have been fixed) we should be celebrating our differences. I don’t have to be Filipino to appreciate Pinoy Pride. I don’t have to be gay to appreciate LGBTQ culture. In fact, I LOVE that people are different from me. I don’t want a world where everyone is the same.

And there is nothing wrong with me celebrating my uniqueness both inside AND out. In fact, I credit a lot of what I appreciate about me on the inside with my outside. I credit my blackness with my sense of humor, my commitment to fighting for justice, and the compassion I feel for other marginalized groups.

It isn’t ALL of who I am. But it IS a beautiful part of me. 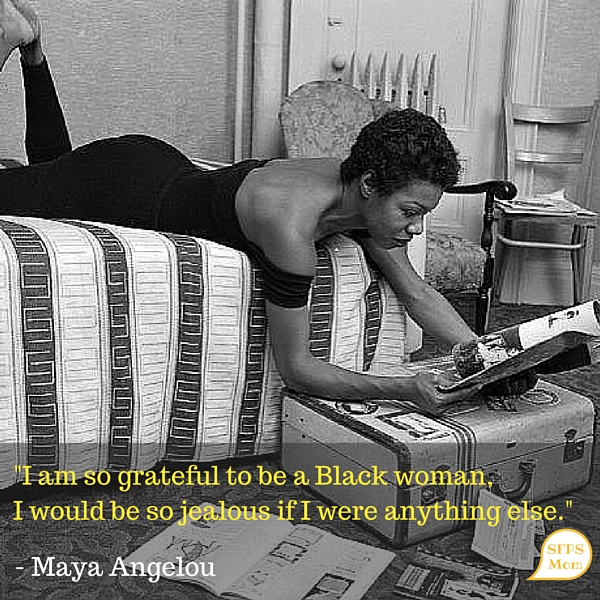 As Maya Angelou once said, “I’m so grateful to be a Black woman, I would be so jealous if I were anything else.”

Does any of this resonate with you? Share your thoughts in the comments below.