Nina Simone has been in the news lately due to the fact that Zoe Saldana is set to play her in an upcoming documentary about her life. Many are criticizing the casting of Zoe Saldana, an admittedly lighter skinned actress who needed skin darkening makeup and prosthetics to play the role. There are many darker-skinned actresses who would have been better suited for this type of casting (see them here). Nonetheless, this goes along with a long-standing tradition to whitewash history in film by favoring lighter-skinned talent and with Eurocentric features over historically accurate casting choices.

What adds salt to the wound is the fact that Nina Simone was not your average singer… she was an artist in the truest sense of the word and a political one at that. At a time when race and civil right were at the forefront of our national conversation, Nina saw that she had an important position as an artist promoting Black Power and self-determination. In an article titled, Speak up or Pass the Mic: Why We Can’t Afford for Our Artists to be Politically Neutral, the author Gina Loring states: “It was an era that changed the paradigm of American history and served as a catalyst for many artists to use their celebrity status as a platform for activism.” I only wish performers today were so visible and vocal. 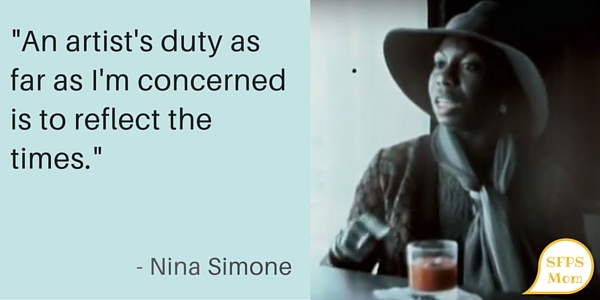 Learn more about the real Nina Simone as she speaks up about an artists role and the power of blackness in the two clips below.

“An artist’s duty as far as I’m concerned is to reflect the times.” – Nina Simone

“We have a culture that is surpassed by no other in civilization but we don’t know anything about it… My job is to somehow make them curious enough or persuade them, by hook or crook, to get more aware of themselves and where they came from than what they are into and what is already there and just bring it out. This is what compels me to compel them.”

What do you think? Share your thoughts in the comments below.

Our budget for the arts? We can do better.