STAR Testing Going the Way of the Dinosaur!

Did you know that STAR testing, (the CA State mandated standardized test) is going the way of the dinosaur? Last Tuesday, SFUSD was granted a waiver (along with 8 other CA districts: Los Angeles, San Francisco, Long Beach, Fresno, Oakland, Sacramento, Santa Ana and Sanger.) According to an Education Week article: these districts “grew impatient with the pace of change their state was setting as it moves toward implementing the common core, and decided to band together to work on a shared approach to schooling.” Instead of waiting for the federal government to redefine accountability measures for the new national and state standards, they joined together to form CORE (California Office to Reform Education) to advocate a tighter approach to accountability than California envisions this year. (The state will eventually drop most of its current assessment system in favor of Smarter Balanced field tests this spring.)

In an article posted on U.S. News and World Report:

The Department of Education issued a first-of-its-kind waiver on Tuesday that will allow eight California school districts to circumvent key requirements of the No Child Left Behind Act. The department granted the districts, which together serve more than 1 million students, a one-year waiver from NCLB’s accountability measures, such as a requirement that schools must bring their students to proficient levels in reading and math by the end of the coming school year.

Read more about the waiver and shift to new accountability measures here and here.

All of this news is really exciting because it means that instead of putting time and resources into administering the STAR tests in English and math (based on the old CA standards), our district will be able to focus its efforts on preparing teachers and students for the NEW CCSS standards and Smarter Balanced Assessment this spring. Students won’t get over-tested, and teachers and schools won’t be penalized while our state tries out the next-generation assessment. Finally, there will be no reporting on this field test of the new assessment. That means that teachers and schools won’t be penalized while everyone tries out the new test. As a parent, I will miss seeing my daughters’ assessment report this time around. Nonetheless, I am happy that teachers, administrators and students won’t feel the pressure of “accountability” as we all try out this new assessment.

STAR Testing: What Parents and Educators Need to Know About the New Assessments

The New Smarter Balanced Assessments are nothing like the old STAR tests. Here are three main ways that they are different:

STAR Testing: The new test will be computer-based, computer-adaptive.

The new test will be computer-based which will allow it to be scored quickly and more easily. It will also allow the test to be computer-adaptive. That is to say that how students answer questions, determines the subsequent questions they are presented with. If you get a problem right, you will get a harder question next. If you get a question wrong, you will get an easier question next. This allows the test more accurate assess student learning, while presenting students with less questions overall.

Finally, computer-based testing also allows testing to be more inclusive for students receiving special education services as well as English Language Learners. Examples of modifications and accommodations might include: allowing students to use a digital notepad, or provide students with translated pop-up glossaries, etc.

STAR Testing: The new test will be on the new standards.

I firmly believe the new standards are way better than the old. I’ve written a previous post on the math standards. Not only are the new standards more comprehensive and challenging than the old standards, they also include conceptual understanding, critical thinking and writing skills. For these reasons, there is some concern that student performance may initially go down, even among “high-performing” students. But if we are assessing what’s really important (student thinking) as opposed to memorization of discrete facts, I think it will be well worth it. If you were not a fan of previous standardized tests, you may change your mind with the new test.

The new test will be go beyond multiple choice.

Any anti-standardized testing parents or educators can be happy that the new tests are designed to measure critical thinking and won’t allow students to guess or choose by elimination. Multiple choice items will be replaced by selected response items which allow students to select not just one from four choices, but one or more from a set of options. (See example, left.)

Technology enhanced items allow students to answer questions using computer technology. Examples of these types of items could be questions that ask students to dragging and drop, highlight text, or draw lines. 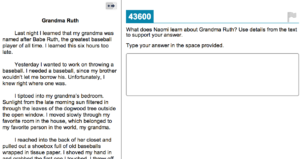 Click the links more information about the new assessment system:

“STAR Testing Going the Way of the Dinosaur!” Related Reads:

What questions do you have about the field test or new assessment?