Why Some White Folks Really Are Color Blind

Somehow, it just feels like I just can’t get through some folks
heads. Black folks like me emboldened with the promise of “diversity” in the 90’s are starting to feel like it just doesn’t matter what we say. We keep trying to “educate” others on the disparities we see and experience every day as black Americans. No matter how humorous, sensitive, or “angry” we explain ourselves, our voices are more often than not ignored…

But if a white person says it… well, then, that’s a
different story!

Enter… the Daily Show with one of the BEST social commentaries I think I’VE EVER SEEN about the ways white folks marginilize black voices. (BTW: This is also very common when men listen to feminist issues, straights dismiss LGBT issues, etc.):

Think this is just a joke? Unfortunately, not so. Here’s proof of
just how pervasive the “color-blind-spot” is for a majority of white folks:

White people’s brains respond differently to people based on race

Research from the University of Toronto-Scarborough shows that white people’s mirror-neuron-system fires much less, if at all, when they watch people of color performing simple motor tasks, such as drinking water. Researchers in the study noted:

“Previous research shows people are less likely to feel connected to people outside their own ethnic groups, and we wanted to know why,” says Gutsell. “What we found is that there is a basic difference in the way peoples’ brains react to those from other ethnic backgrounds. Observing someone of a different race produced significantly less motor-cortex activity than observing a person of one’s own race. In other words, people were less likely to mentally simulate the actions of other-race than same-race people”

Researchers from Harvard and Tufts University have conducted a surprising study which shows that white people think that much needed racial progress has been made since the 1950s — but at their expense.

Researchers at the University of Milano-Bicoccaany found that people (of both races) empathize more when they see white skin pierced than black. This has devastating consequences when it comes to patient treatment.

For example, an early study of this disparity revealed that minorities with recurrent or metastatic cancer were less likely to have adequate analgesia. Racial disparities in pain management have been recorded in the treatment of migraines and back pain, cancer care in the elderly, and children with orthopedic fractures. A 2008 review of 13 years of national survey data on emergency room visits found that for a pain-related visit, an opioid prescription was more likely for white patients (31 percent) than black patients (23 percent).

White folks get most of their information from other white folks

This results in a huge disparity in the way current events are
perceived by whites vs. black. Just check out the chart below to see how this impacts people’s perceptions of jobs, public school funding, crime, etc.

Does this make sense to you? Black folks, how do you deal with having your voice consistently marginalized by mainstream (white) voices? Non-black folks, what are you doing to open your eyes and ears to the black experience? How are you helping to elevate the voices of your black family, friends and coworkers? 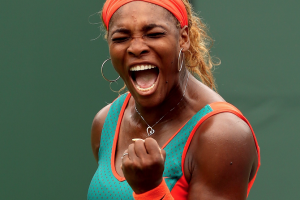 Educating yourself AND YOUR CHILDREN on dangerous stereotypes like these is the first step in uncovering implicit bias that we have all been exposed to, but it's NOT ENOUGH. We need to replace negative images of black folks with positive nuanced representations of blacks which show the diversity of the "black experience". 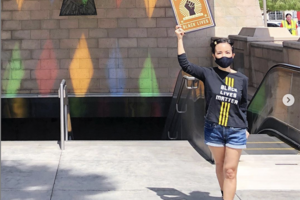 Being a friend means standing up for folks, even when[...] 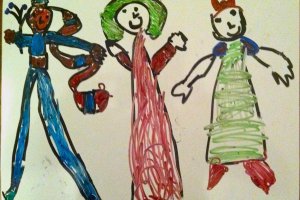 Let’s Talk About Race (Series) – What Color Crayons are in Your Coloring Box?

The simple act of talking about skin color, may seem superficial. Nonetheless, it can be an important first step in talking about race with very young children and is surprisingly absent from many (White) parents' conversations with their kids.