Why I’m not Going Anywhere

The other morning… looking at a recent email (including personal attack) made me feel sick to my stomach. I won’t go into detail into the ways a few self-proclaimed “progressives” have been emailing me and Tweeting me offline, to taunt and ridicule me about comments I express on my blog and in posts on a local parents’ email group of which I am a part.

They do this as if to draw me into a public fight they know they’ll win. I’m tired of one or two people taking up airtime to make underhanded, snarky comments in an effort to shut down conversation on issues that are really important. And yet, I know if I respond directly to these attacks, I’ll just be walking into an ambush that would leave ME looking like the aggressor. (Can anyone say “angry black woman”?)

As if in response to some secret prayer to the Universe I didn’t even know about, while I was trying to think of how to respond (if at all), THIS POST came into my email inbox. (I’m really glad I followed this blog!) It comes from José Luis Vilson, a prominent NYC public school teacher and education blogger I follow who writes extensively about the intersection of race/class and educational access in our nations schools. (He is also founder of the popular hashtag #EduColor on Twitter. Follow him @TheJLV)

This piece was especially prescient based on recent debates I’ve had as related to integration among and within our schools, specifically in the ways that others have sought to marginalize my voice by calling my statements “inflammatory” or “anecdotal.”

The historical amnesia is astounding at best. Even a cursory reading of the history of public schools would lead the reader to conclude that people of color have disproportionately gotten the rawest end of the deal in our schools. While I am a firm believer that public schools are the only mechanism for checks and balances for equity, I also recognize that, before Secretary of Education Arne Duncan made snide remarks at the aforementioned suburban white moms, commissioners and superintendents of schools have historically ignored moms of color since public schools were created. Our school system isn’t just recently dysfunctional; it works as intended and has been resistant to progressive change as a legacy. Most initiatives towards equity have been scaled back if not outright squelched, de jure and de facto, including integration and equitable school funding. The remedies for such progressive policies included private schools and redlining. The actual status quo is surely intact.

Being in San Francisco, there is no scarcity of self-proclaimed progressives who make it clear to me on a daily basis that “they are NOT racist” even while they are urging me to “please, shut up about race!” In doing so, they communicate quite loudly that my voice, as a woman and educator of color, is not important when considering ways to best serve our public school students.

In Vilson’s post, he seemed to be responding to a similar observation that many “progressives” are content to center the dialogue around themselves, while dismissing the perspectives of the very people who need the most to be heard:

While education debaters argue over who’s in front of the hypothetical front lines of education, Black Lives Matter activists are literally in jail, hospitalized, or dead while in front of the actual front lines for equity in living. Instead of centering themselves in how we revolutionize the education system, pro public school advocates, especially white public school advocates, should humble themselves enough to ask communities of color what they wish to see in their schools. Akin to missionaries who thought the Bible might rectify the so-called savages, some folk think the pro public school narrative will be enough to create allies with the under-served.

We do have a few alternatives to the “two-sided education debate”, one of which I’m proud to be a part of. I submit to everyone that, in spite of the nonsense, we can have a public education that grants agency, pedagogy, and equity for all students. I submit that social justice isn’t a set of data we’ve squeezed out of our schools, but unearthing the system, remaking it to match the needs of our people. I submit that educators from head start all the way through graduate school need an entire rethink in our approach to systemic racism, sexism, homophobia, and classism. All this is under the realm of possibility with intention.

Voices like Vilson’s give me strength. I really appreciate him for calling on all of us to reflect deeply about the ways we reinforce or dismantle structural racism in our public schools. I am not going to let one (or even a few) person/s keep me from talking about something this important, especially when there are so many students and families affected by the outcomes of these conversations. I am tired of sitting idly by and listening to people spout coded racist crap (or outright racist crap for that matter!) while we debate another policy that benefits some kids over others. (See the comments in these posts… but be forewarned, some get ugly.) 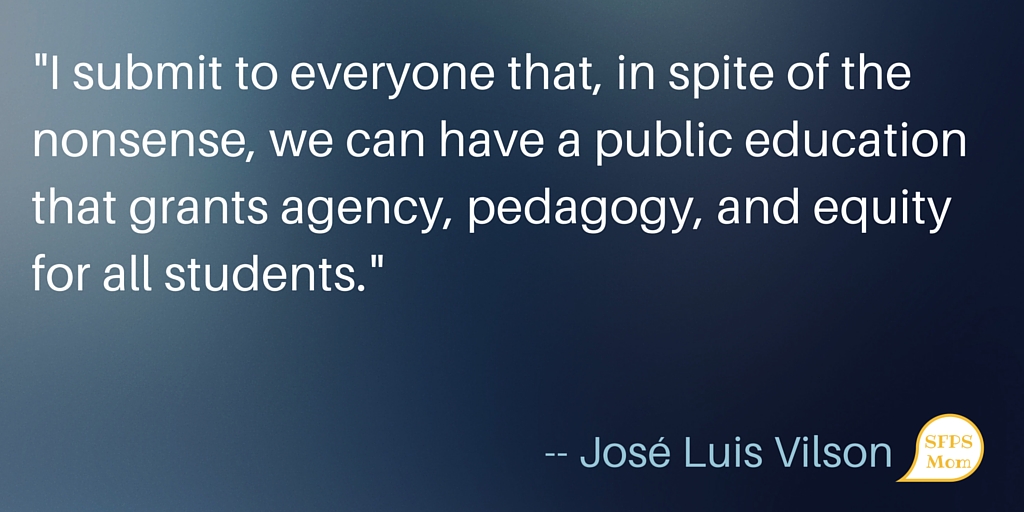 Constantly having to fight for my voice to be heard while others tried to marginalize me almost made me drop out of college (I ended up taking a 2 year “break” from the elite private university I was attending before coming back to finish my degree.) As a mixed-race/Black woman, the difficulty of “navigating white spaces” of PTA’s and Board of Ed meetings reminds me of these experiences (especially in these times of #Ferguson and #BlackLivesMatter), but voices like Vilson’s reaffirm my right to be heard and express my point of view, even when it differs from the vocal minority in our city.

This conversation about how to create high quality schools for ALL our children is ours collectively. It belongs to all students, teachers and parents. Including me and you.

If folks want to talk about bake sales, or fundraising–so be it. More power to them! If they “don’t want to talk about race” they don’t have to read my blog. That said, I’m here to talk about what matters to me–making sure all students (poor, Black and Brown students, immigrant students and those NOT identified as “gifted”) have access to high quality educations in our schools. And I don’t plan to take this conversation anywhere soon.

Does any of this make sense to you? Tell me what you think in the comments below.

2 thoughts on “Why I’m not Going Anywhere”