Who profits from a “broken public school” narrative?

I wrote this a while back (August 16, 2016 to be exact!), but the topic somehow seems relevant due to recent attempts by the DeVos/Trump administration to pull vital resources away from public education in favor of privately managed educational programs. Privatizers continue their attacks on public schools as they struggle to meet the needs of distance-learning and demands to reopen safely. (Most recently, that’s been “pod”/micro-school promoters, and Chronicle OpEd writers.) This is a reminder that trashing public education has always been a tactic to make money off of our public education system, the only safety net serving students from all backgrounds, not a privileged few.

So, what does this have to do with education?

I’ve talked for a while #onhere about the ways false narratives hurt our public schools. Most folks do agree (at least publicly) that all children should have access to a high quality education. Currently, traditional public schools are the only schools mandated to serve all kids. With this in mind, one might wonder why folks who say they value public education perpetuate narratives that undermine our schools?

My dad would say, the answer is simple: For that good ol’ greenback dollar bill!

Truthfully, there are some strong public schools and some that struggle, but to throw our entire public school system under the bus is ludicrous. It does a great disservice to the many dedicated students, families, and teachers that pour their time, money, and love into our schools. More than anything, this harmful narrative seems to target urban public schools serving low-income, Black and Brown youth. However, hundreds of tiny miracles happen in our urban public schools each day that never get media attention. So it’s time to analyzed why the “failing public schools” narrative is so pervasive. Who benefits when public schools fail?

Let’s agree, challenging narratives about how we educate kids is a touchy conversation. So like the tiny print at the bottom of a prescription drug ad, I feel a need to make a disclaimer…

To be fair, I’m not saying all charter teachers are bad, or all private-school parents are racist. I worked in charters for over five years and I didn’t work there with the intention of ruining public education. I have friends who have children enrolled in private schools. I support folks in making choices for themselves and their families. We all have our reasons, and, there are always exceptions. Before reacting defensively, I want to get one thing straight—I’m talking about systems, not individuals.

That said, each day we participate in systems that either reinforce or dismantle the status quo. It’s time for us to start thinking beyond individual anecdotes to analyze the ways our collective choices create our childrens’ schools.

Now, let’s get back to the subject at hand…

Who benefits from trashing public schools?

Previously, I wrote about the way private schools benefit from a “broken public school narrative”. But, they aren’t the only ones who profit.

The multi-million dollar charter industry relies on the perception that charters are private school “lite” with a public school price. The best way for charters to differentiate themselves from traditional public schools is by selling themselves as the free-market (read: better) alternative to public schools which proponents paint as “bureaucratic” and “inefficient”. Most often, charters sell the idea that they offer a specialized curriculum or enhanced instruction that can’t be provided in “failing” schools by veteran teachers. Teachers in charters are painted as spunky, innovative, dedicated in contrast to the old, burnt-out, “impossible to fire” teachers they say are the problem with public schools. (Stay tuned for more on this hot topic. As you can see, I’m just getting started!)

Who Thought Nonprofits Could Be So Profitable?

Private and charter schools aren’t the only ones who thrive on trashing public schools. “Nonprofits” profit as well.  Education think-tanks, curriculum developers, test creators, and educational software developers are also ready to jump in and provide a “quick fix” to what they claim is broken.

“What’s wrong with urban public schools?” you might ask.  “We’ll tell you for just three easy payments of $19.95… MILLION!”  “Want to learn how to turn around your achievement gap? Hire our team of curriculum consultants and TFA wunderkind and we’ll save the day!” Talking about failing public schools is a real bummer, but MAN it really moves product!

Hysteria over our “broken system” has gotten so crazy that nonprofits often serve as middlemen for billionaire funders like Bill Gates who favor investing in outsiders over districts for fear they will mismanage implementation. Yet, when dollars flow to nonprofits to supplant the leadership in a district, it undermines rather than supports. The overall message to educators is, “We don’t think you can manage this… so we’ll do it for you.”.

In my experience, if an entity wants to help a district function more effectively, its work with leadership to fix underlying problems. Instead of truly being of assistance, nonprofits often enable failure within the system be creating workarounds or just doing the work for them. In this way, they become complicit in creating and maintaining problems from which they profit.

Last but not least, we can’t forget “progressive” parents seeking to shed the stigma of private school. Urban centers tend to lean left. Yet, despite the fact that affluent urban parents are more likely to be self-proclaimed liberals, you’ll still find them fighting tooth and nail to get their kids in private schools, strategizing ways to “win the lottery.” San Francisco is no exception. In fact, with our Bay Area history of hippies and wine culture, we practically invented the “chardonnay liberal.”

What does it mean to be a chardonnay liberal? Drive a Prius, buy designer hemp jeans, drink fair-trade organic coffee, all the while putting your kids in an independent school. (Independent sounds soooo much better than private, don’t you think?) Never mind the fact that enrollment is selective. Scholarships guarantee there are still a few low-income kids (who meet the “good fit” requirement.) And even though there aren’t many African-American kids, schools can still be diverse—if you consider international families. Some are even from Africa!

Again, I’m not saying every private school parent is a closet racist. Several of my low-income friends are among the scholarship recipients I mentioned. I’m not going to fault them for doing everything they can to get what they’ve been told is the best education for their kids. Nonetheless, I know way too many folks who’ve cried about the trauma of being assigned to perfectly AWESOME public schools, because there were “too many Cantonese-speaking families”. (Is there something wrong with Cantonese-speaking families?)

I’ve got a LOT to say on this topic! For now, let’s just say, if I drank a glass of chardonnay for every Russian hill parent I’ve talked to that said they really believed in public school and “wished” they could have enrolled but were “forced” to go charter/private, I’d have a serious drinking problem.

Let’s get the record straight.

The crisis in public education is a manufactured crisis. And a “free-market” education system is about as equitable as letting drug companies set prescription prices. Public education isn’t a commodity, it’s a basic human right. It’s time to stop treating families like “consumers” and stop letting snake-oil salesman sell us lies about our schools.

The truth is, our public education system is not any worse off than it was 50 years ago. In fact, public schools are doing better than their competition.

Let’s start with the obvious. Private schools choose their students. They don’t serve English Learner students, students with expensive disabilities, or homeless students. Public schools are charged not only with working with more needy students, they are “held accountable” to doing so.

But what about affluent kids of college-educated families? What about all the stories we hear about “bored” gifted students in mixed-ability classrooms? Surely, they must do better in private schools.

Greater school choice for families and greater autonomy for schools leads to greater academic outcomes, right?  Maybe not.  Using two nationally representative datasets, we recently conducted one of the most comprehensive studies ever performed of school type and achievement in mathematics—a subject widely held to be the best measure of in-school learning.  We analyzed instruction and performance for over 300,000 elementary and middle school students in 15,108 public, charter, and private schools.  What we found surprised us.  Students in public schools actually outperform those in private schools.

(Read more about their book here.)

The research on charters has been coming out for a while now. Several years ago, a study came out of Stanford University’s Center for Research on Education Outcomes looking at academic data from charter schools in 26 states and found insignificant results in many cases. Additionally, researchers are going beyond academic data (read: standardized test results) and finding charters perform significantly worse when looking at graduation rates, suspension rates, and who they serve (hint: disabled children aren’t high on their list. Empathy much?)

And despite the surge in charter messaging that they are more “equitable”, the evidence is mounting. Charter proliferation is actually hurting our public education system. So much so that in 2016 Black Lives Matter and the NAACP called for a freeze on charter school expansion and an increase in investment in traditional public schools. Kristina Rizga, outlines reasons we should be concerned with charter schools, including: “skimming” students, unregulated growth, lack of oversight, and inequitable disciplinary practices.

Why are we buying this narrative?

Getting back to where we began… We all know commercial products are vying for our money. Like it or not, education in our country is big business. Charters, private schools, and edu-nonprofits use careful messaging and advertisements to create “brand recognition” and position themselves in the marketplace. Just like Coke, and Nike and Apple, various groups are working to spin a narrative to move more public and private dollars their way.

For these reasons, it is important for us to question what we hear about urban public schools. We all know McDonalds has a bigger advertising budget than the Broccoli Council (or whatever it’s called.) We should be asking ourselves… When did we start believing that mom’s meatloaf was such a bummer? And, is the “happy meal” of charter and private schools really all that?

Schools are the primary way we socialize our children. As such they reflect society’s deeply held values and beliefs. I urge you to ask yourself these questions:

Does any of this resonate? Tell me what you think in the comments below. 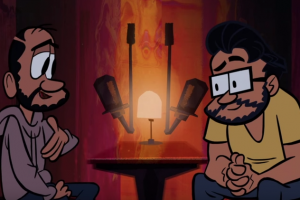 Tell Me a Story 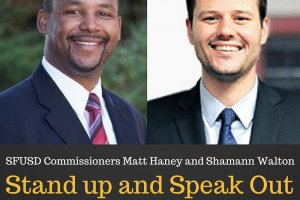 The Bottom Line: Teach for America (TFA) is Bad for our Schools

Learn more about SFUSD's courageous decision to discontinue funding for Teach For America (TFA) and why this is a good move for our neediest kids.