How you can support the #WeNeedDiverseBooks Campaign

Last week BookCon announced a lineup of blockbuster kid lit panelists at an upcoming event: Jeff Kinney, James Patterson, Rick Riordan, and Lemony Snicket. Other than the fact that they are all kid’s lit authors, there is one notable thing they have in common–they all happen to be white men. Folks began raising questions about the lineup noting the lack of diversity. Even some of the panelists chimed in, with Rick Riordan tweeting: “Not privy to the whole scope of programming — hopefully more diverse — but that one panel should be named “Four White Dudes of Kids’ Lit.”

BookCon’s response was more than disappointing. As Amanda Nelson breaks it down in her blog post, A Close reading of BookCon’s Statement:

“BookCon, a readers’ convention being held the day after Book Expo America, released their current guest list last week, consisting of 30 white people and a (white) cat. We’ve been talking extensively around here about why that’s a huge problem and why we won’t be covering the event as a result, so I won’t restate those reasons here. Yesterday, the Senior Vice President of ReedPop (the company organizing BookCon) sent us this statement in response to the criticism. It’s pretty heavy on the Corporate Speak, so let’s do a close reading:

We have heard the concerns and feedback about the current show lineup and are working on making this better.

This does not say, “We were wrong to create a lineup of guests with more cats than people of color.” It does not say “we share your concerns.” It says we have heard YOUR concerns and are working on making this better. It’s just a grudging recognition that the audience has “concerns”, which, when combined with the outright dismissal of these concerns because they come from publishing insiders and not “customers” (which is obviously false, as anyone who glances at BookCon’s Twitter stream can see) casts doubt on their claims to care about what they’re hearing.”

If you want to read more about the controversy, you can read more below:

Though I’m sad to see we are still having this conversation, I’m glad it’s getting the attention it deserves. In response to this controversy, Authors Ellen Oh, Aisha Saeed and Chelsea Pitcher, are organizing three social media events to call attention to the need for diverse books in children’s literature. The #WeNeedDiverseBooks takes place over three days, STARTING TODAY!!!! It is their hope to “raise [their] voices into a roar that can’t be ignored”.

Here’s How to Participate!

Folks will be are sending pictures of themselves with signs that state “We need diverse books because ______” and sending them to to weneeddiversebooks@yahoo.com with the subject line “photo” or directly online to the Tumblr page. Supporters can tweet, reblog, post of Facebook, etc. to get the word out all day and throughout the week. Participate in a Twitter chat scheduled for 11am (PST) using the hashtag #WeNeedDiverseBooks and explain why it is important to have diverse literature available for readers of all ages, especially in youth literature.

How diverse are the books in your home library? At your school? Public library? Bookstore? I created a Library Audit Worksheet: Cultural Diversity tool for me and my daughters to determine how diverse our home library is. Once we tally the results, I hope to work with them to create some charts and pictographs to report our findings. (This is a great connection to 3rd grade CCSS-Math. Keep posted on my blog to see the results.) If it all works out, I hope to work with teachers at my school to do the same for our classroom libraries and school library.

For now, here’s the free printable worksheet I created. Try it out and let me know how it works (or what could be improved!) 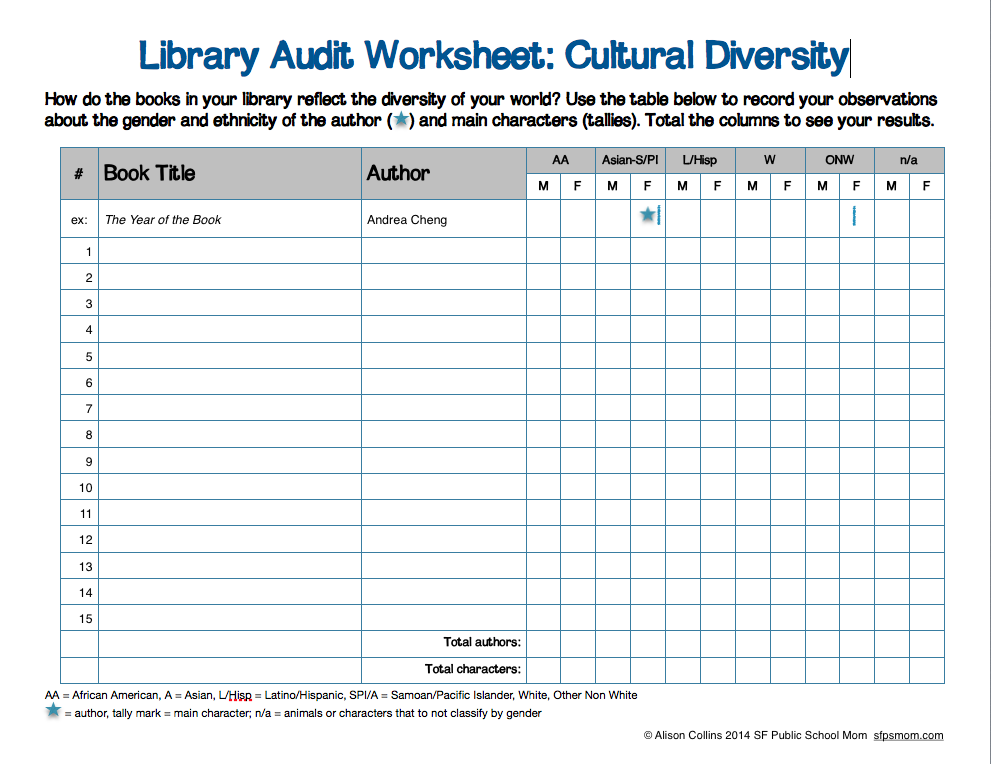 What are you doing to support the #WeNeedDiverseBooks campaign? What kinds of conversations are you having about diversity in what you read?