The Bottom Line: Teach for America (TFA) is Bad for our Schools

If you’ve been following SF’s education reporting, you are probably aware that SFUSD decided not to renew its contract with Teach for America (TFA), an organization which started out as a sort of “Peace Corps of Teaching” to recruits young (read: inexperienced) teachers for our neediest schools. Read about the district’s reasoning here.

Recently, I’ve been seeing some recent articles in the news disparaging the district’s decision. Some speculate the Board of Education is rolling over for the Union. Others say the decision is short-sighted because it hurts the very students that it’s supposed to help: mostly low-income Black and Brown students, students receiving special education services and those at “hard to fill” schools. Nonetheless, in watching the way TFA has conducted itself over the years, a definite pattern has emerged.

Like me, more and more folks are coming to understand TFA is not good for our schools.

Just to put it out there, I want to restate that neither I nor district critics of TFA are disparaging individual TFA teachers. We all agree, there are some very dedicated, caring TFA teachers (and teachers turned administrators) in our district. In fact I’ve known quite a few. Nonetheless, of all the TFA teachers I’ve known, NONE OF THEM are currently teaching in SFUSD classrooms. 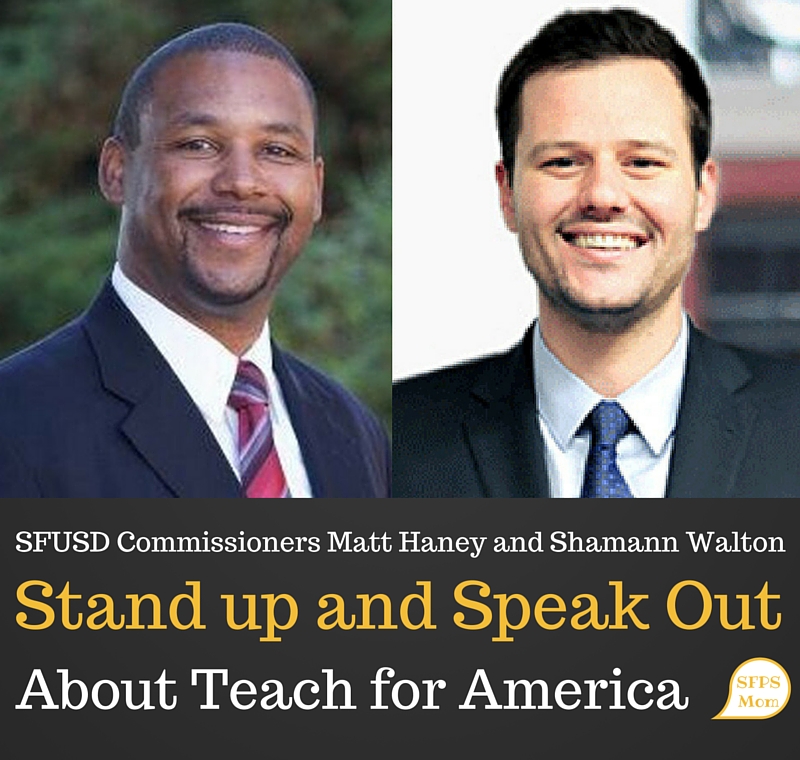 Commissioners Matt Haney and Shamann Walton of the SFUSD Board of Education, cite data in a recent editorial supporting what I and others (e.g. Coleman Advocates, African-American Parent Advisory Council (AAPAC), Teachers for Social Justice) have been saying for years:

Studies show that teachers generally become more effective over time, and high turnover can have devastating effects on school communities and student learning.

As I mentioned, folks have been talking about poor retention rates for a long time now. That said, even I was surprised to learn the numbers were this bad.

Adding insult to injury, I was shocked to learn our district has been paying TFA to place teachers. (!) When you add up all the money we spend on substitutes, coaching and professional development workshops for new teachers who eventually either take their newfound expertise to suburban schools, or leave the profession all together… And then add in the year-after-year disruption that staff changes have on school communities, you see that TFA has been costing our district (and more importantly our students!) much more than they claim to provide.

Based on the recent newspaper articles I’ve seen criticizing the Board’s decision, it seems TFA is now launching a directed PR campaign targeting our district. Don’t be fooled by the “Peace Corps for Teachers” nonprofit branding. TFA is a heavily funded organization, supported by the likes of the Walton Foundation (think Walmart).

TFA may want to portray itself as a saint and savior, but its true nature is becoming clear. What TFA seems most interested in is PR and making a profit—a profit off our our poorest and most marginalized kids. The reality is, our district has given more than enough opportunities to show it’s value. If TFA really cared about our schools it would have done a better job at hiring teachers who stayed in the profession. Unfortunately, it hasn’t been able to fulfill its promises, so not it’s turning its attention on PR attacks our district leadership. These attacks don’t just hurt district leadership, they undermine our public education system as a whole.

Apparently these attacks are not new. TFA’s inability to “listen to feedback” has been widely discussed in the media. In fact, in an article by the Nation, George Joseph outlines TFA’s strategy of dealing with critics (in this case journalists) who threaten TFA’s bottom line:

An internal media strategy memo, obtained by The Nation, confirms Chovnick’s concerns, detailing TFA’s intricate methodology for combating negative media attention, or what it calls “misinformation.” Given that TFA takes tens of millions of government dollars every year, such strategies are troubling. According to its last three years of available tax filings, Teach For America has spent nearly $3.5 million in advertising and promotion. As the strategy memo indicates, much of this promotion goes toward attacking journalists,

Based on what I hear from insiders in the district, (and from what I’ve been reading) TFA has a very effective (and well-funded) PR machine. It’s too bad the organization hasn’t been so obsessive about actually recruiting and training teachers who actually STAY in the profession. If they did that as well as I hear they attack critics, we probably wouldn’t even be having this conversation. Happy customers don’t complain.

Here’s what Commissioner Walton had to say about the most recent PR attack.

By Shamann Walton, SFUSD Board of Education Commissioner

Commissioner Walton recently penned a response to recent media attacks from TFA on his Facebook page, which I am sharing below with his permission.

One sided arguments are always the downfall of the people who need us to fight for them most. If you pay attention to the media, you would think that I am somehow completely illogical and ignorant when it comes to effective strategies in helping students and young people succeed. Without even presenting and including my own track record in ensuring that some of our most isolated and hardest to serve individuals become successful, below is a host of reasons why I will continue to inform everyone that Teach for America (TFA) is not a productive solution for increasing achievement in our lowest performing schools and it is a model that encourages mediocrity and promotes continued strategies that haven’t worked for decades:

1. The bottom line is you can’t show me any data where we see increased test scores, academic improvement or any indication of growth for schools who continually utilize TFA cohorts (maybe one or two minute examples in hundreds).

2. When your arm is broken, you don’t go out and use a band aid, because it is not enough. The ignorant argument that we should put TFA teachers in classrooms, just to have a body in front of our students, is exactly why we are not seeing improvement in these schools. It is on our HR Department to aggressively and effectively recruit quality and well-trained teachers (whether it is easy or not is not the issue here).

3. We have to stop making excuses and go to work to bring in quality educators. We all have a job to do. TFA’s model of focusing on people who need to “find themselves” for two years at the expense of our students is more unfortunate rhetoric and extremely disheartening and disingenuous.

4. It takes courage to choose hope over fear. TFA and their lobbying arm promotes fear and would have you believe that 15 teachers could even come close to adequately addressing teaching shortages. It is a mistake to use this as a tool and a default in contrast to experienced, credentialed and effective educators. It’s unfair to the students you put in front of them. Not all TFA interns are bad and not all experienced teachers are good, but intent is everything here and the TFA model itself promotes a temporary assignment. Our students need and deserve more. Would you want that for your child? No. Some of our students and families don’t have the resources to fight these decisions to place TFA interns in our lowest performing and most disenfranchised schools. That’s why we are here.

5. What you don’t see in the article is the fact that 80% of TFA interns leave SFUSD within 5 years and the ones that do stay do not remain in the classroom or at the schools in which they begin teaching in. There are better alternatives!

6. You never see TFA present data about achievement; only data about how great they are and how lucky we are to have a body in a classroom. Where’s the proof of success in achievement? Probably doesn’t exist.

At the end of the day, it is a band aid solution, for a more deep seeded and and systemic issue. It continues to be harmful for the success of our students and growth of our schools. Unfortunately, because of the backing of corporations (like lousy Walmart) and the backing of Ivy League elitist, we will always have to accept band aid solutions by “well meaning” individuals, at the expense of our students who need us most.

Does anyone care about the sustainability of our lowest performing schools? This is not about politics. This is about the seriousness of the needed education for the populations with the highest gaps (our Black, Latino, Pacific Islander, Children with Special Needs, English Learners and foster care students).

Our children deserve better and I will always fight for better. HR needs to do their job!!!

Interested in learning more about why TFA is bad for our public schools?:

3 thoughts on “The Bottom Line: Teach for America (TFA) is Bad for our Schools”

In Memorium for those we have lost to COVID-19