Shishi Rose: “White women do not get to speak over Black women when we discuss the divide.”

Each day, I see calls to normalize a Trump presidency while he attempts to stack the Executive Office with cabinet members such as white nationalist, Steve Bannon, and public education privatizer Betsy DeVos. Meanwhile, hateful harassment, intimidation and bullying are on the rise in our nation and in our schools.

The disconnect between the national narrative and daily observations have caused me to become more and more disillusioned with mainstream media. As a result, I’ve been surviving on social-media, specifically Twitter, Facebook and more recently Instagram.

That’s when I discovered @Shishi.rose. (Here website is here.) Lately, I’ve become a big fan. If you’re not already following her, you should. Shishi has quite a following (32K+ and growing!) This fact is not surprising. The thing I love about Shishi is her courage and honesty, which is desperately needed these days. If you could personify “speaking truth to power”, I think it would look like her.

Shishi caught my eye because she speaks so openly about her experience as a Black woman organizing in White spaces. Notably, she posted a video about criticism she received after sharing an article titled, “Your Safety Pin Doesn’t Stand A Chance Against White Supremacy,” by Christy DeGallerie.  (It’s an excellent article, which I suggest you read.) In the video and in subsequent posts she commented on the dismissive way Black and Brown organizers are treated by White allies in spaces organized to resist white supremacy.

What she puts into words so well is that in ostensibly “safe” spaces (e.g. feminist meetings, the comments section on her private Instagram account, etc.) Black and Brown women are still asked to center themselves around White people’s feelings. In this case, she describes how Black women such as herself are called to debate the merits of safety pin wearing, while trying to refocus the conversation on the very real issues of survival in our country.

It’s Time for White “Allies” To Check Themselves

As we organize to #resist a Trump presidency, it’s important to be mindful of the ways we engage in multi-racial dialogues about race and gender equality. White folks need to understand the ways their socialization in whiteness manifests itself in even “progressive” spaces. Even when it’s not intended.

Shishi deftly illustrated this reality in an Instagram post a few days ago. She described speaking up at a feminist organizing meeting after another Black woman brought up the topic of racial division, and was immediately spoken over by several White women. With her permission, I’m sharing her post below:

Something happened last night at the #UnitedDayOfWomen’s event. And I hope @latonyayvette doesn’t mind me putting her on the spot with this post but I want to highlight it because Black voices matter. She began to talk about the racial divide among women & how we as Black women are not included in the conversations & are often talked over. And someone changed the subject. Then someone else changed the subject then someone had to answer what they asked & then I had to bring it back to what Latonya said by saying that white women do not get to speak over Black women when we discuss the divide. They don’t get to change the topic because of uncomfortability. 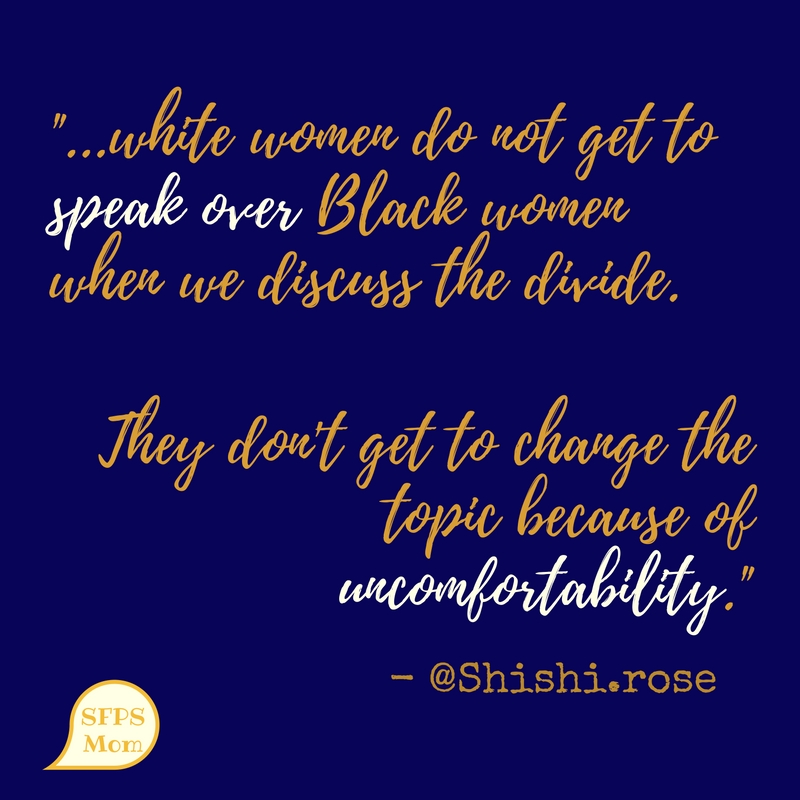 It reminded me of the article addressed to White Liberal Feminists post election (link in my bio) & how angry white women have been when they are forced to look past their own oppression as women, as poor women, as gay women & realize that they hold racial privilege. To realize that that’s the reason white women voted against their own best interests because they have historically put themselves at the forefront of every movement, their hate to propel them there, & tried to pretend that we struggle the same way.

Any unsafety you feel is now a small glimpse into what women of color have always felt. Understand that white women can & have always used their privilege against other marginalized people even when they don’t realize it. Even when they are well-intentioned. Sometimes the most than, in a setting meant for all women to share & be heard they can still talk to much & shut down what we say. You don’t get a pass at unchecking yourself because you call yourself a feminist, a liberal, or because you get invited to an activist meeting. You DO NOT get a pass because of being a women. Your best tool to use in activism is listening. 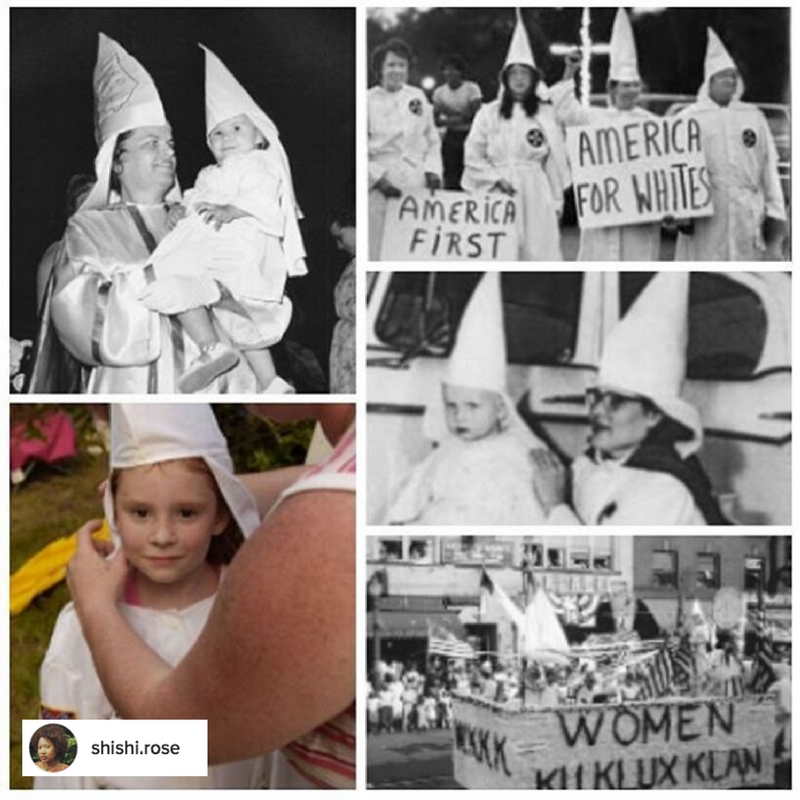 I used these photos because I’m tired of white women coming to me all the time still so confused about how over 50% of white women voted for Trump. Photos like these are rarely what we associate with the Klan, with racial violence, or racism. But who exactly do you think sewed the robes & taught the children? White women. It’s time to check yo self because you already wrecked yo self.

Does any of this resonate with you? Share your thoughts in the comments below.

2 thoughts on “Shishi Rose: “White women do not get to speak over Black women when we discuss the divide.””