Waking up to the #SayHerName hashtag was a brutal reminder that we cannot sit by while black men and women are murdered by our “justice” system. Sandra Bland was a young Black woman arrested last Friday, July 10, 2015 for a traffic violation. She was scheduled to be released this Monday, but was instead found dead in a Texas jail cell three days later. (Read more here.)

While we push for answers, it becomes harder and harder to withstand the onslaught of very real violence being perpetrated against Black Americans. White supremacy in this country has done more than raise its ugly head, it’s thumbing its nose and sticking its tongue out at all of us. Lawrence Brown writes about this in a Salon article appropriately titled: This is American terrorism: White supremacy’s brutal, centuries-long campaign of violence:

The evidence is clear. The reports are in. There is no other conclusion. It’s 2015, and Black people in America are under a sustained and lethal terrorist attack. 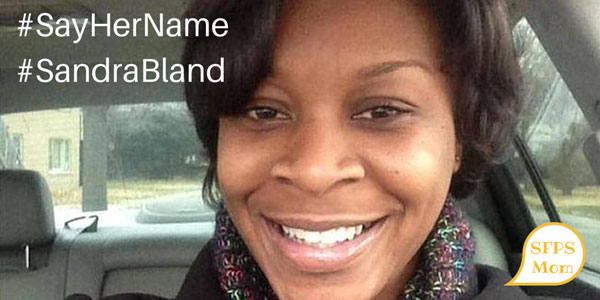 While we fight for social justice in our communities it’s important to REMEMBER the names of those who have fallen. It’s important to pull our heads out of the sand. Sandra Bland was a twenty-eight year old college-educated woman. Last week, she returned to her alma mater, A&M University in Texas to interview for a student outreach job that she was scheduled to start on July 15. Sandra Bland was also a truth-teller.

Sandra Blands Call to Action: Do something!

This is a video by Sandra Bland calling all of us to fight for a fair, just, safe world for ALL Americans:

Sandra Blands Call to Action: What are YOU doing? Let’s make sure Sandra Bland’s call to action was not in vain. Reading articles and talking about how sad everything is isn’t enough. Get involved in the new movement. White, black, Chinese… it’s time to stop pretending that our country will “just get over” its racist past. In the memory of Sandra Bland and all of those whose names are unknown, it’s time to get involved in the fight.

What are you doing to create a fair and just world for ALL Americans? How are  you fighting anti-black racism in your community, school, professional networks?