Protest Art – Artists of the #Resistance

Art is a tool for resistance. It speaks truth to power, pushes back against harmful narratives, flips the script, calls out injustice, and lifts up marginalized voices. This weekend, as we prepare for a White Supremacist Rally to descend on our fair city, the San Francisco will be engaged in protests and meet-ups to resist messages of hate. In preparation, I thought I’d share some artists who’ve been giving me inspiration as of late. Use these artists’ work to inspire your own protest-poster making, or do family art (as we’ll be doing) to celebrate love, equity, and justice for all people.

Artists of the #Resistance 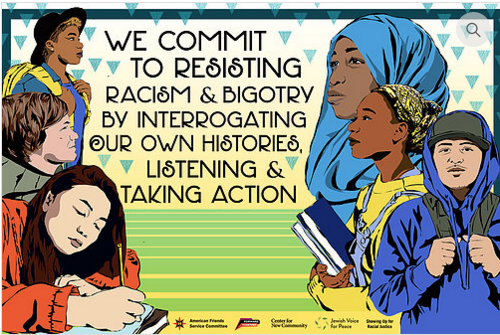 Kate DeCiccio, is also a former educator, committed to uplifting stories. I found this AWESOME clip about her and her creative process. I will definitely be sharing it and talking about her with my kids.

Like the above artist, Micah was featured during the Women’s March by the Amplifier Foundation. Micah is a “Micah Bazant is a trans visual artist who works with social justice movements to reimagine the world.” They do beautiful posters uplifting trans and racial justice. I truly a fan.

Micah’s work is highlighted in this video highlighting a Black trans elder and legendary activist Miss Major Griffin-Gracy highlights how simple, everyday acts can serve as symbols that change the world.

Mixed media with portraits of beautiful Black women and girls. They are the embodiment of #BlackGirlMagic! This could be really powerful inspiration for middle schoolers obsessed with selfies. 😉

Favianna is a Bay Area artist I found on NPR who does protest and social art. Let’s just say I am a BIG FAN!

Here’s a great video of her talking about her art as a means for changing biased narratives. This would be a great resource to share and discuss with your kids!

Alexandra basically rewrites New York Times articles and “fixes” them by substituting her “radical edits” to make them more accurate, and then blow them up and posts them in large panels on city walls. She started creating these panels around the second anniversary of Brown’s death. As this New Yorker article states: “The newspaper’s coverage of Brown had received sustained, impassioned critique, particularly for its use of the phrase “no angel” to describe Brown, which the newspaper’s public editor called a “regrettable mistake.”

Three young intersectional feminists and activists in the Bay Area using art as activism. These amazing artists are passionate about “social justice, intersectional feminism, and resisting the Trumpist agenda.” Go to their website (linked in the heading) to purchase protest signs, banners, stickers, t-shirts, and bags. Proceeds go to ACLU, Black Lives Matter, the SPLC and Planned Parenthood.

2 thoughts on “Protest Art – Artists of the #Resistance”