It’s been a while since I last posted… Anyone who is a parent or a teacher knows that the final months of school seem to whiz by with “so much to do” by the end of the school year. With only two school days left, I look back and am amazed at all the change families, teachers and students have faced this year:

This doesn’t include all the new initiatives that are making our schools more equitable and safe for all our students: a new district-wide approach to providing special education support, Family Engagement Standards, Restorative Practices, new policies that favor alternatives to suspension… the list goes on and on.

If that weren’t enough, the state just released a new funding formula (called the Local Control Funding Formula, or LCFF for short) which promises more money for schools, especially those serving our neediest students. The new funding formula gives schools and districts more spending flexibility, and in return requires a higher level of accountability to stakeholders such as teachers, parents and community members by requiring school districts to create a plan based on input from said community members about how the money should best be spent. (This plan is called the Local Control Accountability Plan, or LCAP for short). That said, over the past few months, many districts staff members, non-profit community partners and parent leaders have devoted countless hours convening meetings to provide community input on next year’s district plan. This has been an exhaustive, yet exciting process…

This all sounds wonderful right?

Districts are being asked to realize the promise of public education for all students while raising expectations for student learning through new standards, assessment and accountability measures. In addition districts are being asked to engage families and community members in truly meaningful ways. This isn’t the first time our schools have been asked to raise the bar. What’s different, is that this time, there is also money behind it. This time, it looks like we might finally be given the resources to be successful.

Add to this the hope of finally raising teacher and paraprofessional salaries, after years of lay-offs and pay cuts (during a recession no less) in one of the most expensive cities in the nation. I don’t know if we could ever afford to pay our beloved teachers what they are truly worth, but wouldn’t it be nice to pay them enough to live in our fair city?

Don’t pull out the champaign just yet… If you are a veteran of public education, you (like me) have been fighting your own cynicism… waiting for the next shoe to drop…

I’m sorry to say that the other shoe has just dropped.

Cue announcer: “We interrupt this broadcast of a hopeful utopian future to return to our regularly schedule programming: legislation of public education as usual.”

While districts across CA were worked diligently preparing plans and budgets for the next school year, and while teachers busily straightened up their classrooms, made graduation preparations, collected books and printed out report cards (dreaming of a much needed summer vacation)… Governor Brown released a teacher Pension Plan that has left everyone’s proverbial head spinning.

In a recent SFGate article by Jill Tucker last week, she writes:

“When local school district officials pulled out their calculators and started crunching the numbers based on the governor’s new plan to shore up the state’s teacher pension fund, their jaws hit the floor.”

(The term “bait and switch” comes to mind…)

A letter from Superintendent Carranza

Then, yesterday, as I an educator working for the District, I received via my SFUSD email a letter from the Superintendent. I think it sums up our current situation clearly and succinctly and believe it important for families to read as well. So, with Superintendent Carranza’s permission, (he is also an SFUSD parent by the way!) I am posting his letter in its entirety.

I would like to update you on the Governor’s May Revise and the impact it will have on our district. We had been hoping for good news from the May Revise but, not only was there no new funding for schools, the Governor introduced a new financial burden on our budget. Governor Brown is now expecting  districts to pay a bill, in the amount of several billion dollars, to cover the State’s unfunded pension liabilities as soon as next school year and every year after for the foreseeable future.

This expenditure will spend a significant amount of the very same revenues we are counting on to provide services for our students and salary increases for our employees. In contrast to what the Governor said just six months ago, his latest budget undermines the State’s commitment to increase funding for underserved students.

We agree that the pension shortfall is a problem that has to be fixed, but this burden is being placed squarely on the backs of school districts. Under the Local Control Funding Formula (LCFF) we are responsible for improving educational outcomes for our students and for spending a significant portion of LCFF (supplemental and concentration grants) to produce measurable gains for targeted students. The timing of the announcement could not come at a less opportune moment for all of us, just as we are finalizing budgets created through extensive community input and months of thoughtful planning about how to better serve students.

The Governor’s CalSTRS proposal would require our district to increase our employer-funded share from the current 8.25% of compensation to 19.1% over the next seven years while including no additional funding for this purpose. The CalSTRS proposal would require us to eliminate about $27 million worth of services over the next three years. These are the numbers over the next seven years: the district currently pays an employer contribution of 8.25% which is around $25.8 million based on current year certificated salary levels. With this new proposal from Governor Brown, we will have to pay an additional $3.9 million next year, an additional $8.9 million in 2015, and $14 million in 2016. Each year thereafter the amount keeps growing. In 2020, we would have to spend well above $60 million on certificated pensions alone.

We are joining forces with others across the state to convey our serious concerns with the Governor’s proposal. I have contacted the Governor and legislative leaders to express our dismay at the abrupt timing of this unfunded mandate and to call for a solution that will ensure a stable pension fund but not hurt our ability to educate our students or do right by our employees.

I will continue to keep you apprised. If you would like to learn more, information is available here:

My best wishes for a smooth final week of school and thank you for your continued dedication to our students.

What do you think about all of this? What can parents and teachers do to respond to this new development? 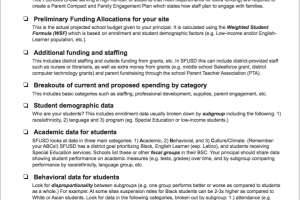 A checklist listing all the information you need to ensure equity and shared-decision making during the school site planning process at your school!

Learn how the new Local Control Funding Formula (LCFF) will change funding for CA public schools. Learn more about the new funding formula and find out how SFUSD is gathering input from families to create its Local Control Accountability Plan (LCAP). 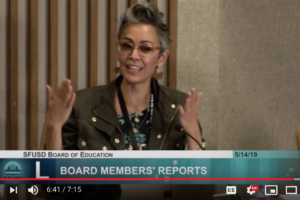 Supporting the Arts with Love and Logic

As I look closely at the VAPA budget, I can see discrepancies in where the money is going. I’ve been asking about these for a while now, from the VAPA staff. So far, I'm not getting clear answers...