Fighting Bias and Transphobia in our Communities

Yesterday, in an effort to start a dialogue in response to the Orlando mass shooting, I reblogged a post by my dear friend Tula Jeng listing actions we can all take to fight gun violence. I’m continuing this conversation with another way we can take action to create a more peaceful world: fighting bias and transphobia in our communities.

When public heartbreak is the tip of a very ugly iceberg.

I’m heartbroken about the shooting in Orlando at the Pulse, a gay bar, on Latinx night. It crystallizes for me a lot about how I try to show up in the world & support others to show up. This and (too many) other mass shootings are most visible part, the tip of a huge iceberg of violence against LGBTQ people, people of color, & immigrants. The rest of the iceberg looks like individual trans women of color being fired, beat up & killed, kids being mocked & ostracized at school & beat up on a daily basis. That iceberg includes attacks on Arab & Muslim people, it includes the ways we talk about shooters as “mentally ill,” ostracizing people with mental health disabilities and resulting in a system where people don’t get the health care they need.

The seeds of this violence are planted in small daily acts we all see and participate in – like when we make jokes (or let them stand), which come at the expense of others based on their identity. Make no mistake, the attempts to frame this kind of terrorist act as a “mental health issue” or as “Islamic terrorism” expand this iceberg & make it stronger.

People with these identities walk around carrying that iceberg – the possibility of violence at any given moment. People with identities that are accepted in our society are also impacted by this iceberg. It chills us – makes us unnecessarily fear others & distorts how we see those around us. It hangs over us, with a threat that if we don’t conform, we too will lose our jobs, our friends, or even our lives.

On the other hand, the warmth of love & inclusion begins to melt the iceberg. Each time we show up and challenge a racist, anti-immigrant, anti-gay/trans, anti-Muslim slur, we chip off a chunk. These kinds of attacks are about who is considered a part of our society & who is safe. Attacks like this look for the folks we push out of our social circles and target them in small daily tragedies and occasionally as larger collective tragedies.

We all have a responsibility to create, join & expand circles that include all our human siblings. In saying that some are like us and others are not, we communicate who can be attacked. In the same way that people are lining up to give blood to the victims, let us all work harder to show up for each other each and every day and make our communities more inclusive & united. 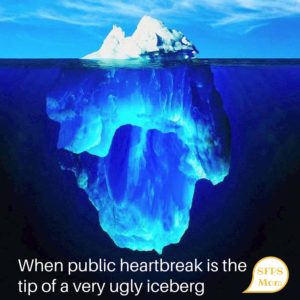 There is unfortunately nothing we can do to bring back the victims of the Orlando shooting. Nonetheless, we can work together to make our world a safer more inclusive space for all people.

What do you think? What actions are you taking to counter bias against the LGBTQ and Muslim community? Are you speaking up when you hear slurs or witness bias? Share your thoughts in the comments below.

As Omicron ramps up, getting tested shouldn’t be this hard.

How might state and federal grants help us fill gaps in our budget shortfall and protect vital services to our students?