(Please excuse the formatting, I typed this on my Brother Word Processor as quoted from a Fox 2 News interview I pretended to have with myself and then cut and pasted into my Medium feed. Read Supervisor Farrell’s interview here.)

Recently Mark Farrell posted a statement on Medium regarding Jane Kim’s statement calling for Chief Suhr to resign after Hunger Strikers and Hundreds of San Franciscans’ ongoing protests of racist texting by some SF Police Officers and other SF Police Officers who killed people, namely Alex Nieto and Mario Woods and Luis Gongora, and Amilcar Perez-Lopez, and maybe some Other People we don’t know about because there weren’t any witnesses or they weren’t captured on cellphone video.
“I am using quotes to express my ideas on this, because it’s what I thought upon reading Mark Farrell’s statement,” said me.
“If Mark Farrell says Chief Suhr is the ‘most progressive police chief in the history of San Francisco’ he could be right, considering in the 50’s all our city’s schools were segregated and Black people including Willie Mays faced great difficulties in buying homes due to racism and redlining. It’s 2016, and we have a Black president and an Chinese American Mayor and stuff.”
“I’m using quotes again to emphasize these are my thoughts I’m having in my brain which are then coming out of my mouth” (end quotation.)

(Start new quotation, even though it’s still me. I’m actually saying this stuff out loud before I write it down.) “And even though homeless people armed with kitchen knives are getting shot up and honest, dedicated (Black) police(women) like Sargent Yulanda Williams who participated in the Blue Ribbon Panel on Police Bias are being personally attacked by Our City Police Officers’ Union, it is maybe fair to consider putting ourselves in Police Chief’s Suhr’s shoes, and think about all the Angry Black and Brown (and White and Asian) people he’s had to listen to, complaining about him to his face at all those annoying community meetings he’s been hosting that allow public comment. I mean, SHEESH! When will they all get over it already? Right?”, said no progressive Police Chief or Supervisor, ever.” (I’m adding an unhappy face here made from a colon and a closed parentheses to really communicate the sad feelings Chief Suhr must be feeling right now.)

🙁
Well, actually, it probably looks more like this…
:/
“In fact, it seems like maybe Supervisor Mark Farrell is saying Jane Kim should stay out of the discussion entirely because, I mean, she’s only an elected official commenting on a high level political appointee or something, right? And when Supervisor Mark Farrell puts it like that, it actually does seem like Supervisor Kim is making a calculated move, making a statement about all this when she is running for State Senate at a time when five people are hunger striking and hundreds of San Franciscans are protesting at City Hall. Speaking up about government is so political, don’t you think? The fact that three other San Francisco supervisors have also called for Chief Suhr’s resignation should not bear any relevance to Mark Farrell’s statement, because they are men (as he is possibly implying) and as such might not be as prone to emotional outbursts when running for office during such politically charged moments in our City.” 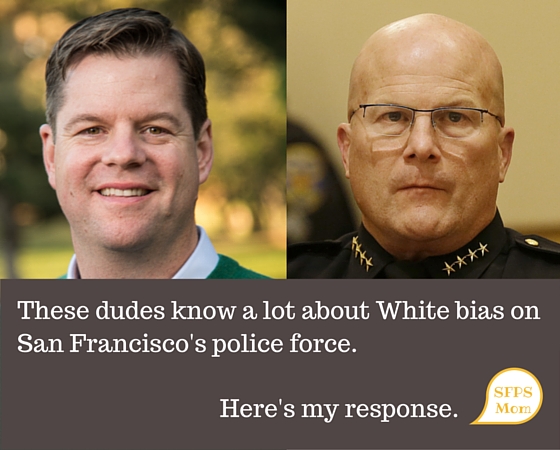 “Mark Farrell is definitely correct in stating, ‘Supporting our police officers does not mean defending, accepting or condoning bad police practices’. I agree, it would be really cool if ALL San Franciscans could move past Chief Suhr’s tenure overseeing a police force rife with racist and homophobic texting, and shooting immigrants in the back, and killing homeless folks, and shooting people armed with tasers 40 times, and more racist texting, and harassment of women police officers of color, and excessive use of force against peaceful protesters of police killings of folks suffering from mental illness so we can all work together to ‘accelerate the efforts of the ongoing and proposed police reforms’ to impactful and meaningful’ change in our city.”
0
SHARES
ShareTweet