You Can’t Learn if You Aren’t in Class…

The other night, the Mothers of the Movement who comprise the mothers of so many Black folks who have become unfortunate hashtags in recent years (e.g. Trayvon Martin, Tamir Rice, Sandra Bland, etc.) spoke at the Democratic National Convention. (I highly encourage you to read Melissa Harris Perry’s amazing write up on it.) When I see these heroic women, I think about all the Black mothers and fathers in our country who bear the incomprehensible burden of preparing their children to venture out into an often violent and unwelcoming world.

I grew up light-skinned and middle-class, and thus know very little about navigating urban war zones or suburban cul-de-sacs while Black. Nonetheless, my 20 years as an educator have made it clear to me that our streets are not the only minefields Black youth face. Our schools are merely a reflection of the societies which create them. Just as police officers and politicians justify physical brutality against Black and Brown folks in the name of “law and order”, I have witnessed educators perpetrating social and emotional violence under the guise of “discipline”.

Support or punishment? That depends on your skin color.

Recently, I read a great post by my new favorite educator and school administrator Kelly Wickham Hurst which shows how racism is institutionalized in school discipline. In the post, she tells the story of two boys, one Black and one White, to illustrate systemic inequality in the ways educators administer punishment or support based on race:

“Within a two week time span we dealt with the discipline of two 8th grade boys: one white, and one Black. The disparity in how the school’s administrative team responded to their consequences was astounding in his scope and sheer, blatant racism. I’ve seen this play out numerous times both as a classroom teacher and an administrator. It’s the kind of thing that is kept quiet and we don’t talk about it. If you bring up race, you’re silenced, ignored, or punished. Whiteness protects itself within the system. How we responded to each boy is a stunning example of that.”

In the article, the author, a school administrator describes how a White student caught dealing marijuana received parent conferences and support, while a Black student caught cutting school was subjected to TWO visits by police (!)

When we suggest that Black Lives Matter, this is what we’re talking about. We mean that in these two cases we shouldn’t have given the white student all manner of support while calling the police into a public school to deal with the Black student. Empathic support of students looks different and it shouldn’t. There’s no reason that a school should contact police to handle student behavior that broke no laws (he didn’t have drugs, he just skipped school)…

…Whiteness protects itself and comes out in these nefarious ways in multiple systems in the United States. It rips my heart out to know that Lashawn’s mother trusted the system that much. She trusted us to have his best interest at heart and she trusted us to know the care he required. Calling the police for him was wrong, it was a mistake, and it was racist. I know why she trusted us. Parents of Black students are often told that their children require more discipline and that schools need to step in to help them. It’s the way the system works and it disempowers parents raising Black children by taking control of parenting them en loco parentis.

Some districts are doing better than others

San Francisco is doing a great deal to improve how it handles discipline. I’m not sure how the data has been collected, nonetheless, you can see that we are doing much better as compared to other districts.

The Hidden Cost of Suspension

Find your state and district in this National Center for Educational Statistics (NCES) website. I’ve cut and pasted a screenshot of the Bay Area. You can see SF in light blue, and Sausalito in the dark blue above it. (WTH????) 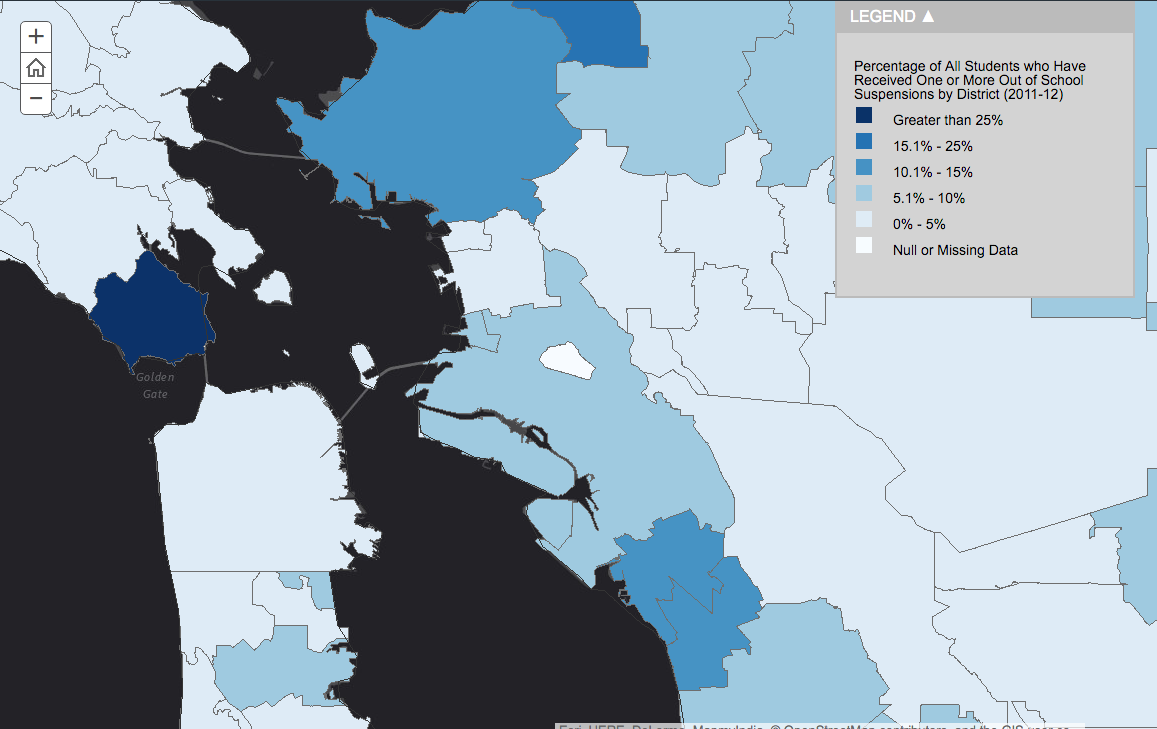 That said, there is a lot of hidden data that we don’t collect. How many students receive detentions? “in school suspension”? (where students are suspended from class and placed in another classroom in the school to do busy or make-up work) or are sent to another teacher’s classroom temporarily? How many kids are “benched” during recess or PE? How is this data tracked by race, gender, and program, etc.?

Why are students being kicked out of class in the first place? Kelly Wickham Hurst shared some ideas on this topic in a Storyify. Her words deeply resonate with my experience in diverse urban schools…

Homework for White Parents of Students

Much of what we know is that white students are kicked out of the classroom for things we can see: throwing, hitting, tantrums.

Yet, Black students (and many SOC) are kicked out for unseen things: having an attitude, insubordination, and the ambiguous "disrespect".

There's an enormous difference between DEMANDING respect and COMMANDING it. Teachers should be the models for commanding it.

And about Black children who are autistic and on the spectrum. It's not just dangerous out here in these streets: classrooms count, too.

(Check out more of the Storify here.)

As Kelly points out, institutionalized racism plays a big part in the ways students receive discipline. Several years ago SFUSD, discovered Black children were being suspended for “willful defiance” at much higher rates than other ethnicities. Data showed that in San Francisco, Black students made up roughly 10 percent of the student population yet accounted for more than half of suspensions and expulsions. Latino students also were suspended at higher than average rates. In response, the district eliminated this category and suspension rates dropped dramatically.

According to the National Center for Educational Statistics: 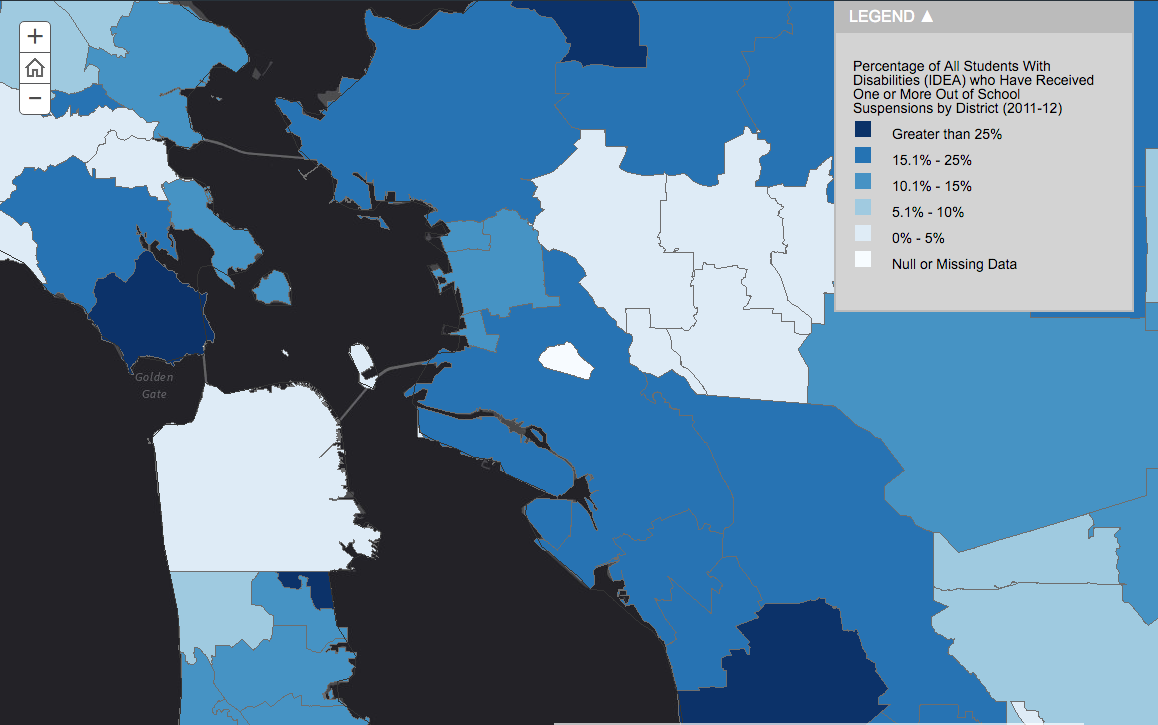 Kids aren’t the only ones with “bad attitudes”

It’s not just “bad” kids getting kicked out of class. How we handle discipline has a lot to do with how we perceive our students as challenging vs. defiant (read: our own internalized racism, otherwise known as implicit bias). It often has something to do with our capacity to work with kids with various learning needs. It also has a lot to do with our ideas about discipline/punishment and our role as educators and parents in helping kids learn pro-social skills or get the support they need to be successful.

Recent research out of Stanford University confirms this. Jason A. Okonofua, a Stanford University social psychologist led experiments studying the impact of a one-time intervention which helped teachers and students empathize with each other. He says:

“Changing the mindset of one teacher can change the social experience of that child’s entire world,”

Middle schools who participated in the study showed a reduction in suspensions by half. (!) The intervention also helped previously suspended students feel “more connected at school”.

And, let’s not overlook the kids who voluntarily “opt out”

Kids know when they are wanted. They also know when you have high or low expectations of them.

I can’t tell you how many students are in school but NOT in class by “choice”, aka: they are in the hallways, cutting class in school. I can’t tell you how many times I’ve seen Black and Brown kids wandering hallways with NO adults asking them where they are going or why they aren’t in class. I recently had to stop a middle school tour to get the Parent Liaison to get staff members to address two girls (Black and Latina) who were clearly socializing out of class. I couldn’t believe the Parent Liaison just kept the tour going, like she didn’t see anything, or like it was normal. (?!?)

In another example, I joined a friend’s parent-counselor meeting only to learn her middle school daughter was consistently late/absent to classes on days she was AT SCHOOL. I had to wonder… what are staff expectations when kids roam the halls? What are expectations for teachers, security aides, paras, and office staff in getting kids in class. I wonder what the racial and gender demographics are on these “soft” tardies and absences.

Why do kids “opt out” of class? They may be doing what teenagers do… pushing boundaries. Instruction could boring or culturally irrelevant (like reading only books by “dead White guys”). Or, maybe students are picking up on the fact their teachers don’t really want them in class. Sometimes, as was the case in Kelly’s story, students are in crisis and cut class to get support from friends. Nonetheless, we will never know why kids are out of class IF WE DON’T EVEN TALK TO THEM!!!

Parents and educators: Let’s push back on institutionalized racism in our schools!

In order for Black lives to matter on our streets, Black minds must matter in our schools.

Kids can’t learn if they aren’t in class. It’s pretty basic. This fall, there are many things families (and educators!) can do to address racial disparities in school discipline and attendance:

Parents and educators MUST step up. We mush push back on institutional racism in our schools to ensure all kids get access to a great pubic school education.

It’s up to all of us to speak up, ask questions, create change. Let’s roll up our sleeves and get to work!

What do you think? How can parents and educators improve disparities in attendance and discipline in schools? What are other ways you see institutional racism in schools?