Why “Grading” Schools is Wrong

One of my favorite edu-parent-bloggers, Bill Ferriter, of The Tempered Radical, recently wrote about the North Carolina’s decision to assign letter grades to individual schools based on nothing more than test scores, a practice which I believe should be illegal.

It’s high time we started tearing down the belief that “grading” schools somehow informs parents or improves education. Not only does it unnecessarily worry parents, it’s unfairly blames teachers, increases segregation in our communities and undermines our public education system as a whole.

Here’s a bit of what Bill has to say about his state’s rating system, and it’s impact on his daughter’s school:

My daughter’s school is nothing short of a remarkable place.  EVERY time that I stop by, I feel a sense of happiness from everyone that I meet. Students smile and skip and laugh and joke with each other and with their teachers.  Teachers are relaxed and joyful, invested in each other and in their students.  Provocative questions are being asked and answered, positive messages are being shared in conversations and in school-wide displays, and programs that concentrate on developing the whole child….

…But they were rated a C — which means something akin to “decidedly average” — by the State of North Carolina last week.  And that has me worried…[My daughter] has role models to look up to who challenge her to be better than who she is — and I am convinced that those role models see her as something much more than just a test score…

…I am worried about is the consequences that a C rating will have on the choices that her teachers make.

Grading Schools is Wrong: Test scores might tell us about individual students, but they don’t tell us much about overall instruction

We all know that test scores tell us more about parent education level, income and, yes, RACE, than they do about teaching quality. Unfortunately, many parents use these ratings to asses the quality of schools.

In SF, our state and district departments of education use a variety of methods to assess quality for public schools. I am glad our state and district don’t evaluate teachers based on test scores like they do in states like North Carolina and elsewhere. Nonetheless, even when you include non-academic measures like suspension rates and attendance (as our district does), in many cases the school rating only serves as an indicator of the number of low-income or Black/Brown students.

Moreover, whether you agree with a more comprehensive state rating system or not, it almost doesn’t matter. Rating schools is now big business. Recently an article came out in our local SF Biz Times sharing the “Best Schools” lists for SF schools. These ratings come from a new start-up called Niche which joins Great Schools in rating schools. (I’ll get into this more in a following post.)

Grading Schools is Wrong: Is your School the “best”? (or the “worst?”)

The San Francisco Business Times article titled, These are the 10 best public elementary schools in San Francisco lists an interactive map of the “10 Best Schools” which, surprise, surprise ALL HAPPEN TO BE ON THE WEST SIDE OF THE CITY. 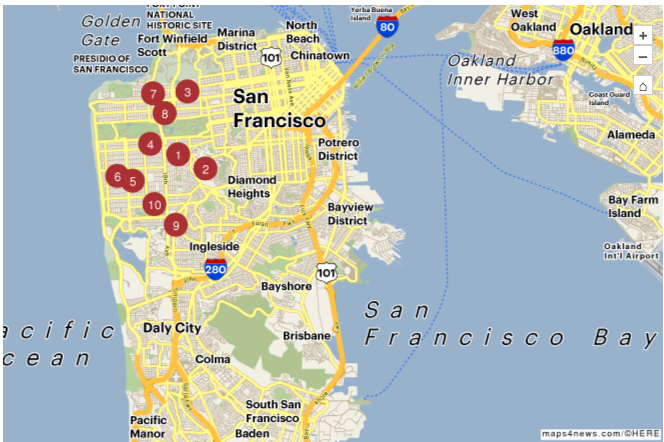 Grading Schools is Wrong: The list includes the following schools;

Now, don’t get me wrong, I have no doubt the schools listed above are wonderful schools. The problem is, there are MANY, MANY, more EXCELLENT schools in our district that NO ONE HAS EVER HEARD ABOUT.

Take Jean Parker Elementary for instance, a school my daughters’ attended. They are reading WELL BEYOND their grade level, have been consistently challenged and have felt like valued members of a loving and nurturing community their entire time there. I’ve met teachers at Gordon Lau, Harvey Milk, John Muir… the list goes on and on. Looking these schools up, they score B’s on the rating scale.

Grading Schools is Wrong: Bill Ferriter, is an experienced educator who feels his child’s school is a good one. Yet it rates a C. What does that say about the state rating system?

Test scores and rating systems don’t tell you what’s working well in a school or highlight areas for improvement. They don’t increase parent knowledge, nor do they improve instruction. Instead, they misinform families, telling them to question their judgement about public schools, especially those serving marginalized communities.

Grading Schools is Wrong: Why Do We Grade Schools Anyway?

And where do private schools fit into all this? That’s easy, they don’t. White and affluent kids go there, so we already know they’re good… right?

And what messages does this send to teachers working hard to serve our most marginalized students? Teachers working with the hardest to serve students are the most likely to see low scores on standardized tests. When we base school accountability measures SOLEY on test scores, we guarantee teachers serving our neediest students will be rewarded with the lowest “grades” for their schools.

Does any of this make sense to you? … Me neither.

One thought on “Why “Grading” Schools is Wrong”