I’ve written about this before. But, since the horrible events in Charlottesville, I feel a need for a repost of sorts.I decided to create a hashtag #WhiteSupremacyToolkit to illustrate (and expose) the ways “nice” white folks maintain white supremacy in conversations about race. I wanted to analyze the ways whiteness works to protect itself.

But first, let’s start with the movie, the Exorcist.

Just like the evil that possesses Linda Blair’s character, white supremacy likes to hide in the open. It likes to pretend it’s normal.

But… when People of Color start to call it out, when they even acknowledge it’s existence, we see it’s true nature: survival at all costs.

White Supremacy defends itself in pretty typical ways. Dr. Robin DiAngelo calls this the Discourse of Violence. If you want to read her research (and I highly recommend it!), it’s here.

Based on Dr. DiAngelo’s research, there are some typical ways White folks react when People of Color start talking about race. The following are definitions and examples:

Racial Innocence is an attempt to distance themselves from culpability for maintaining white supremacy. Racial Innocence also commonly shows up as “My family didn’t own slaves.” Read: This sh*t isn’t MY fault.

Positioning PoC as “Perpetrators of Violence

The Orange Menace (aka, our current president) uses this dog-whistle when he calls for “Law and Order” and alludes to “violence on all sides” (despite the fact that Black folks and other marginalized people) are clearly the targets of violence. This shows up in the form of calling Black women angry, saying People of Color hate whites, and feigning personal attack, when race comes up. 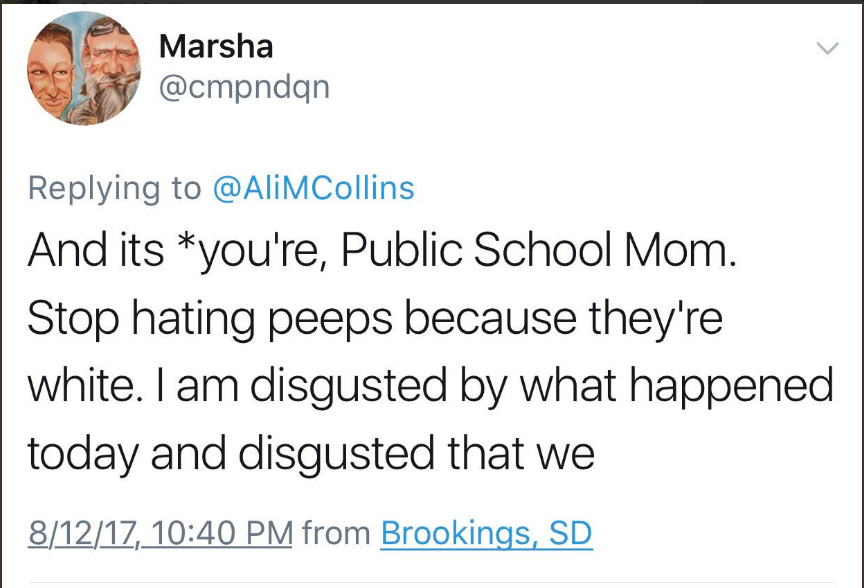 White folks who are resistant to owning their responsibility for dismantling racial injustice will also often use #WhiteTears (a form of White Fragility). This is a passive-aggressive tactic to position themselves as victims of reverse racism.

White Solidarity is displayed when “well-meaning whites” band together to protect racially innocent whites from “mean” attacks of “reverse-racism” by angry People of Color.

This is the idea that we are all one big happy family. If you’d seen the #ThisIsNotUs hashtag on Twitter, you know what I mean. Universalism is meant to erase Black pain and position Blacks as disrupters. 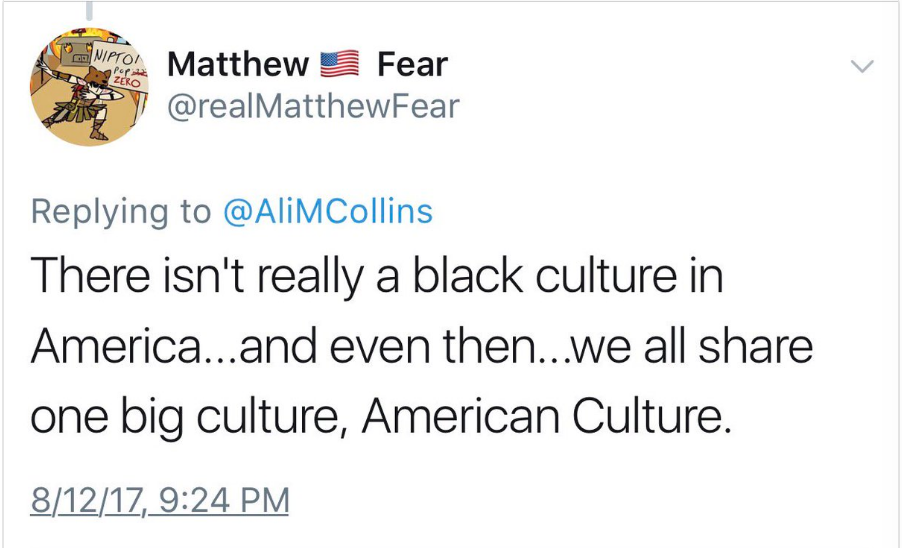 This is the myth of meritocracy and #BlackExceptionalism. This is “we had a Black president” so shut up bootstraps racism. Individualism blames marginalized folks for their failure to achieve. It denies structural barriers based on identity exist.

This is a fake-ass idealized alt-history of U.S. race relations. Examples include: #ThisIsNotUs, the “American Dream”, and happy slaves. And if you think this sugar-coating of our country’s past, is in the past, think again. It was not long ago that Scholastic got slammed for publishing a “fun” fictionalized account (in picture book form) of smiling slaves who “jes’ luves to bake birthday cake for ‘da President.” (These are my words, not the books… but, you get the picture.) Recently, the “imagined community” idea popped up with HBO, when Game of Thrones creators proposed an alt-history series exploring “What if the south had won?” (Pardon me but… WTF?!?!?)

As you may have guessed, there are a lot of folks who are NOT having it. In response, several Black cultural critics created an online campaign to cancel the show before it even gets produced using the hashtag #NoConfederate. These amazing women include Bree Newsome (the shero who pulled the down the confederate flag), Rebecca Theodore (an acclaimed writer who focuses on diversity in the media), April Reign (the creator of #OscarsSoWhite), and Jamie Broadnax creator of BlackGirlNerds. (Read more about the campaign, and, follow and support these women. They are #BlackGirlMagic personified!)

As events in Charlottesville clearly show, Black folks do not need anymore fan-fiction celebrating a traumatic history which frankly hasn’t ended. (And we especially don’t need it authored by white males who have a janky track record at casting Black actors.)

“Nice white racists” don’t want to acknowledge structural barriers and injustice. In order to continue to benefit from white supremacy they must silence People of Color and other marginalized folks. Thus, the first step in dismantling structural racism and white supremacy is NAMING IT.

Yes it is. Always has been. Stop tweeting feel good hashtags and go fix this shit. It’s not on us. It’s on you.

A thread on what I’m hearing from teachers during Omicron.