Everything You Were Taught about Math was Wrong

A few days ago, I became engaged in a debate with a blog reader and fellow educator. It seems a middle school math teacher is having a tough time getting her head around the idea that we need to rethink math instruction.

As educators, and often formerly successful students, it is often hardest to question how we know what we know. The reality is… most of us (including TEACHERS!) were taught math “the wrong way”.

Here are some misconceptions about math instruction we all grew up with: If you’re interested, you can read my debate with the aforementioned math teacher at the end of this post. Nonetheless, as a edu-blogger who’s been covering the implementation of our district’s new math sequence for several years now, and I’ve come to realize these types of arguments have been going on for a LONG TIME NOW, and are relatively all the same. Providing evidence here or there may be helpful for some. But, most often folks will argue, no matter what evidence they see.

I’ve learned, the only real resolution to this debate will come when we get serious about challenging our beliefs about math — who is good at it, and how we learn it.

Here is just one example of the type of belief systems at play in arguments over math instruction. After reading my post on the benefits of heterogeneous, differentiated instruction the aforementioned teacher states:

“An inclusive classroom is undeniably better for all the inclusion kids (SPED, 504, ESL)….but the research also shows those circumstances are NOT better for the other kids. As a teacher, I spend the majority of my time focusing on the special needs and the students that are behind grade level. That, coupled with discipline issues, school bureaucracy, and the endless paperwork…leaves little time to focus on those kids at grade level or above.”

First off, this educator confuses “inclusive” and “heterogeneous”, which is pretty problematic. In case you are a parent and are NOT fluent in “education-ese” (teacher-speak), it’s important to know that ALL our classrooms should be inclusive, meaning they should be welcoming to all students no matter what race, language, socioeconomic status or sexual orientation students represent, despite whether they are heterogeneous (e.g. mixed-ability as opposed to grouped in classrooms by ability) or not.

Call it a freudian slip or just unfortunate editing, but reading through her comments, you see a decidedly biased tone conveyed by the words she chooses. When arguing with folks about the benefits and/or drawbacks of heterogeneous classrooms, it is not surprising to see similar patterns emerge, whereby kids are sorted into “smart” vs. “inclusion” kids. (These were her words… one wonders, is this a nice way of saying dumb?).

In addition to the smart vs. dumb dichotomy, we see misconceptions around learning math as an entirely linear progression of mastery, that must be approached in a rigid step-by-step manner. To be fair, kids need to know how to multiply to be successful in algebra classes. They also have to learn to add and subtract before they can multiply and divide. No one in their right mind would argue against this. Nonetheless, no other discipline is built upon such a strong hierarchical framework of good vs. bad and “one-way is the only way” type of thinking. 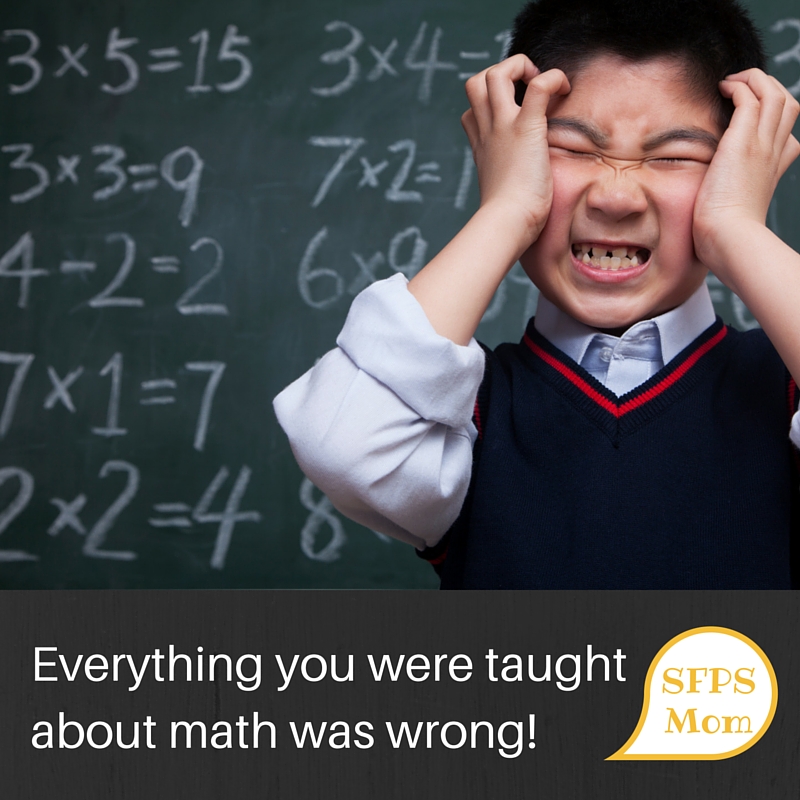 Think about it. Why is Math considered a skill you are “born with”?

Some kids are stronger readers or writers than others. Nonetheless, do you ever hear anyone brag, “I’m really good at English. I get it from my Dad.” Or conversely, “Your child will never be good at reading and writing, maybe have them focus more on STEM careers.” Only in math do people grow up with a whole perception of themselves defined by childhood experiences focused around solving algorithms quickly.

Think about it. Why is tracking by ability so prevalent in math instruction yet virtually absent in other content areas?

Kids need to know academic vocabulary and be able to read proficiently before they can comprehend complex content. Nonetheless, we don’t separate kids into social studies and science classes by ability. As a high school English teacher, I often had classes filled with students reading at a wide range of grade levels and I was still expected to teach all of them. We don’t say, “Oh no, you didn’t do well in biology, so you can’t take chemistry.” or “You got a low score on your standardized test in reading so you won’t get to take 9th Grade English with your peers.” Why have we been doing this in mathematics?

Think about it. Why have various math domains always been taught in isolation?

Everyone agrees that the skills taught in language arts are critical for success in college and career. Language Arts content includes reading, writing, listening and speaking. Within these four domains, students are expected to deconstruct complex texts and make meaning from them. These texts can take many forms, including: newspaper articles, biographies, poetry, plays, literature, research, web pages, etc.

Arguably, none of these domains exists in a vacuum, and while teachers may focus on one aspect of learning at a time to help students really learn it, all domains exist in relation with one another. You can’t teach students how to write an interpretive essay on a novel, for example, if they don’t have solid reading comprehension skills.

When applied to the real-world, math functions in much the same way. If you want to engineer a bridge, you need a high level of problem-solving ability as well as knowledge of physics, and geometry. You also need to be able to work with teams of architects, contractors, and other engineers to co-create a design that will ultimately be used.

The traditional model of math instruction has not been organized in this way. Rather it focused on teaching students discrete skills is a rigidly prescribed way. Instruction prioritized the memorization of algorithms (math formulas) and calculation, at the expense of other important math skills. (Remember all those worksheets?)

For many students, this has meant even kids who consider themselves “good at math” may only be good at solving algorithms quickly and accurately. This is an important skill to be sure, and is very handy when it comes to filling in bubbles on a test sheet. Nonetheless when you ask students to apply what they are learning, they had better be able to explain what they are doing and why they are doing it. There are many exciting STEM careers out there, none of which list “filling in bubbles on worksheets” as a critical skill necessary for success.

Think about it. If the “old way” was so good, why were our students doing so bad?

Despite what some folks say, our traditional approach of sorting and labeling kids into high-performing and low-performing tracks wasn’t working for many students. If it were successful, would we have results like the ones shown below? This data was presented by the SFUSD Math Department to the Board of Education before it unanimously approved our current math sequence.

When educators call for the return of tracked math classes in our district because it was more “successful”… I’m left wondering, “So, this is what you consider to be an upward trend? And you’re a MATH teacher?” 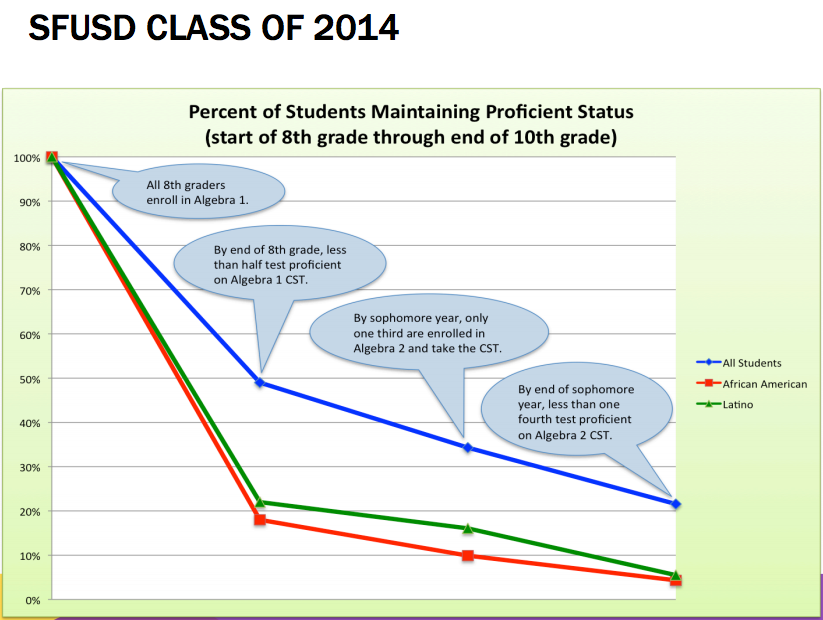 And of course, this isn’t just an SFUSD problem. Educators, employers and parents have been complaining about the inadequate preparation of students in STEM for years. In fact, it’s a primary reason Common Core Math was redesigned to allow students to go deeper in understanding math concepts and the ways math functions in relation to real world applications.

Its’ time for a Math Revolution!

As we approach teaching math in new ways, we have to be willing to throw away outmoded ideas about how it is taught and who can learn it.

So what does this new model of math instruction looks like? According to a recent Mindshift article, the answer lies in Complex Instruction. And, though it may be “complex” for some math educators, it feels very familiar to me as a former English teacher because a similar type of instruction has been around in the literature for decades.

This new approach to math instruction was originally researched by Elizabeth Cohen and Rachel Lotan at Stanford University who studied an approach taken by teachers at “Railside High” (not the school’s real name) who were charged with drastically changing instruction in order to improve student results. This led them to try something different — “heterogeneous classes, high expectations for all students and, above all, approaching math with an eye to students’ strengths.”

Here is what the article has to say about this new approach to instruction:

“The three main tenets of Complex Instruction are that learning should have multi-ability access points, norms and roles that support interdependency between students, and attention to status and accountability for learning. In most Complex Instruction classrooms the majority of class time is spent with students working in groups of four on a rich task that has multiple entry points and ways it could be solved. If one student can solve the problem in his or her head, it’s not a rich task.”

Reading articles like these gets me so excited about the innovative direction our SFUSD Math Department is taking. As Lizzy Hull-Barnes, the head of SFUSD’s Math Department, states:

Much of what is described [in the article] is core to our district-wide approach. A few of our teachers are quoted, Tracy Thompson from Washington and Yuka Walton from Denman. San Francisco gets named towards the end, including our own Angela Torres and Ho Nguyen.

Basically, over a 7-year span, our district has been making the herculean effort to shift the way our teachers approach math instruction in a field that has resisted innovation for decades. And while many other “high-performing” districts rested on their laurels or outsourced common core implementation by paying outside developers (read: Pearson) to produce canned curriculum for their teachers, our district invested in teachers working collaboratively to build a collective understanding around the new math standards. Moreover, they formed professional learning communities to challenge their thinking about the ways students learn math, and created a new model built around helping every kid see themselves as a “math person”.

So you may be saying, this all sounds like a wonderful vision. Are we there yet? The answer is decidedly, No. Go back to that debate I was having with that eighth-grade teacher and you see how difficult it can be to let go of outmoded ideas once we have come to accept them as truths.

But this has always been the case. We used to believe the world was flat, and a woman’s uterus could spontaneously move around about the body (This of course explained why women were crazy… but that topic is for another post!) Thankfully, we’ve seen the demise of these beliefs, along with other ridiculous beliefs such as the idea that it is “unnatural” for gays and lesbians to love or marry, or that Black people are inherently violent. (Well… actually we’re still working on that. :/ )

I get it — change is hard. But, that’s no excuse to stay stuck in the past. Isn’t it time we all get over it and move out of the “dark ages” of mathematics instruction. Every year we wait is another year students miss out on potential opportunities to LOVE math!

What do you think about the ways we think about math? How does your conception of yourself as a “math person” center around your ability to compute or memorize math facts? Were you ever told you were “not good” at math? How would this new approach to instruction have helped you expand your appreciation and understanding of the wondrous world of math!

Fear and Loathing in SFUSD…