I am so excited to host a guest post from Eric Barbus, an AMAZING children’s librarian at the North Beach Branch of the San Francisco Public Library. I first met Eric after I wandered into the North Beach Public Library and asked Eric if he could give me some new book recommendations for my advanced elementary readers.

I am always looking for good reads for my 9-year-old daughters who are constantly looking for new books. I count myself lucky that I don’t have to encourage my kids to read. Nonetheless, it has become a challenge to constantly find them new books which match both their reading AND developmental level.

There are lots of good kid lit books at their reading level, but many of them are a bit too advanced in terms of subject matter. For example, the Hunger Games series is very popular and will be a great choice for them when they enter middle school. But right now, as fourth graders, the series seems a bit too violent, and the themes it tackles are quite advanced.

So, getting back to Eric, it turns out I chose the best librarian to ask for help. Not only is Eric super friendly and helpful, he also really knows his stuff! In fact, Eric serves on the Newbery Award Committee where he is working with other incredible librarians across the country reviewing Newbery hopefuls.

Eric gave me and my girls some amazing recommendations and got them hooked on some really great new books. I asked him if he could write up some of his favorite recommendations to share on this blog and I’m happy to say, he said YES!

If you are in North Beach sometime, visit the children’s library and give Eric a big THANK YOU! Better yet, support your local public library by becoming a member of the Friends of SF Public Library.

So, without any further adieu, here is Eric’s list of favorite books for advanced upper-elementary readers 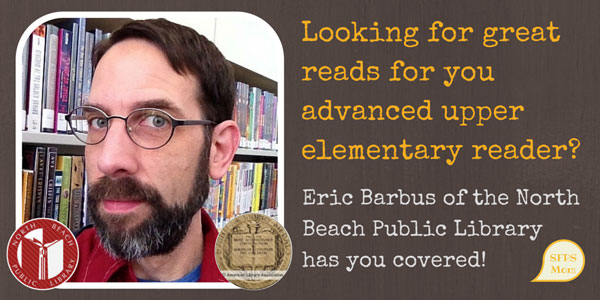 The Various (first title in a trilogy) by Steve Augard

While staying on her uncle’s rundown farm in the Somerset countryside, twelve-year-old Midge discovers that she has a special connection to the Various, a tribe of “strange, wild–and sometimes deadly” fairies struggling to maintain their existence in the nearby woods.  When I first read these titles, they gave me the feeling of reading an old classic.  Just stunning language and a timeless narrative.

A Hitch at the Fairmont by Jim Averbeck

When his aunt is kidnapped, an eleven-year-old boy staying at San Francisco’s Fairmont Hotel in 1956 tries to find her, with the help of Alfred Hitchcock.  A fun little mystery that introduces kids to the amazing Alfred Hitchcock, and takes place here in San Francisco!

The Penderwicks: a Summer Tale of Four Sisters, Two Rabbits, and a Very Interesting Boy (first title in a series) by Jeanne Birdsall

While vacationing with their widowed father in the Berkshire Mountains, four lovable sisters, ages four through twelve, share adventures with a local boy, much to the dismay of his snobbish mother.  Winner of the National Book Award Winner for Young People’s Literature, and deservedly so.  Each of the four sisters has a clearly-distinct, well-drawn personality in these quaint, breezy books that are anything but fluff.

Living in isolation with a robot on what appears to be an alien world populated with bizarre life forms, a twelve-year-old human girl called Eva Nine sets out on a journey to find others like her.  The author/illustrator previously co-wrote The Spiderwick Chronicles, and says that he wanted the WondLa series to have the feel of a modern Wizard of Oz.

In the year 241, twelve-year-old Lina trades jobs on Assignment Day to be a Messenger to run to new places in her decaying but beloved city, perhaps even to glimpse Unknown Regions.  Fascinating premise that has a boy and a girl hoping to save their city when the main light source begins to fail.  Another one of my absolute favorite series.  Subsequent books in the series deftly and delicately deal with social issues.

The Line by Teri Hall

In a dystopian future, Rachel’s mother works as a housekeeper on an old estate and Rachel has begun helping to raise orchids. The greenhouse where she works is just yards from THE LINE, a line that was formed during a war where U.S. troops came in and sectioned off a large chunk of land. When Rachel comes across an old recorder playing a garbled message of help, she decides to assist a boy on the other side of the line whose family needs medicine. A FANTASTIC story that smacks of a classic, with just the right amount of politics and a message about questioning our government. Somewhat of a 1984 for tweens.

P.K. Pinkerton, a 12-year old, half Lakota indian living out in the Wild West in 1862, comes home one afternoon to find his foster parents slain, and now he’s on the run from outlaws who are after a piece of paper that P.K.’s mother entrusted to him on her deathbed; a piece of paper that would grant the bearer land believed to contain a large natural deposit of silver.   After hopping a stagecoach, P.K. finds himself in Virginia City and continually getting side-tracked on his way to get his paper notarized by engaging in a host of adventures including helping a guy cheat at poker, dodging bullets while disguised as a girl, and, ultimately, deep in a mine.  P.K.’s character is kept interesting and given depth by the fact that, although it is never explicitly spelled out – likely because it was never identified at the time – he is clearly operating somewhere on the autism spectrum.  The first paragraph of the book reads, “My name is P.K. Pinterton and before this day is over I will be dead,” and it’s full speed ahead from there on out, with most chapters ending in classic “How will he possibly get out of this situation?” cliffhangers.

Where the Mountain Meets the Moon (and its companion, Starry River of Sky) by Grace Lin

In the valley of Fruitless Mountain, a young girl named Minli lives in a ramshackle hut with her parents. In the evenings, her father regales her with old folktales of the Jade Dragon and the Old Man on the Moon, who knows the answers to all of life’s questions. Inspired by these stories, Minli sets off on an extraordinary journey to find the Old Man on the Moon to ask him how she can change her family’s fortune. Winner of a Newbery Honor, this is a fantastic, touching story-within-a-story which is scattered throughout with Lin’s gorgeous illustrations.

The Unwanteds (series) by Lisa McMann

In a society that purges thirteen-year-olds who are creative, identical twins Aaron and Alex are separated, one to attend University while the other, supposedly Eliminated, finds himself in a wondrous place where youths hone their abilities and learn magic.  Billed on the cover as “Harry Potter meets the Hunger Games” – which is a fair assessment, though there isn’t much violence.

When her baby brother is kidnapped by crows, seventh-grader Prue McKeel ventures into the forbidden Impassable Wilderness–a dangerous and magical forest in the middle of Portland, Oregon–and soon finds herself involved in a war among the various inhabitants.  To me, this series (written by one of the members of the band The Decemberists) has the feel of a modern Chronicles of Narnia.

Certain to ruin his much-needed quiet Christmas break, a number of strangers arrive one by one to stay at Greenglass House, an old smuggler’s inn run by Milo’s parents.  When a number of the mysterious guests’ items disappear, Milo and the daughter of the inn’s cook assume alternate identities, inspired by an old RPG game that Milo’s father used to play, and attempt to solve the mystery.  The chilly setting, largely vacant inn, and cast of characters with shadowy intentions who seem to all have a connection to the history of the inn, all add to the tone, while Milo’s attempts to discover the secrets of the inn, his parentage, and… well…  an out-of-left-field twist toward the end keep the pace.

When Kendra and Seth go to stay at their grandparents’ estate, they discover that it is a sanctuary for magical creatures and that a battle between good and evil is looming.  A favorite series of mine that I always recommend.  With both a boy and a girl as the main protagonists, this should appeal to all!

After passing a series of mind-bending tests, four children are selected for a secret mission that requires them to go undercover at the Learning Institute for the Very Enlightened, where the only rule is that there are no rules.  Fantastic series that champions the smart and awkward!

Related reads: Great Kid Lit and Picture Books for Your Holiday Gift List, Do Not Read This Just Try… I Bet You Can’t, Looking for More Great YA Books?

Do you know of some great books for advanced elementary readers? Please share your favorites in the comments below!