This Friday! Help Me and FWN End Violence Against Women

Recently, I got the opportunity to participate in a production of The Vagina Monologues at the Herbst Theater in San Francisco. (It’s the real deal people!) Not only is this event my first bona-fide opportunity to put that NYU acting degree to use (although I always felt being a teacher came pretty damn close…), this event is a key fundraiser for the Filipina Women’s Network’s (FWN) Anti-Violence Awareness Campaign to end violence against women and girls. Each year, the campaign donates proceeds to various organizations working to end violence against women. I feel very proud to be a part of this event and join other notable Vagina Warriors who’ve participated in previous productions of the Vagina Monologues, including San Francisco Supervisor Jane Kim and Board of Education Commissioner Hydra Mendoza.

This year proceeds Benefit the Filipina Women’s Network and the Comfort Women Justice Coalition (CWJC) , an organization working to establish a Comfort Women memorial in San Francisco. This memorial will bring awareness to the tragic history of the “Comfort Women,” one of the most heinous war crimes of the 20th century. The mission of the Comfort Women Justice Organization seeks to “bring justice for the hundreds of thousands of victims and survivors, and how you and others can join us to right the wrongs for a belated redress.” (Learn more here.) 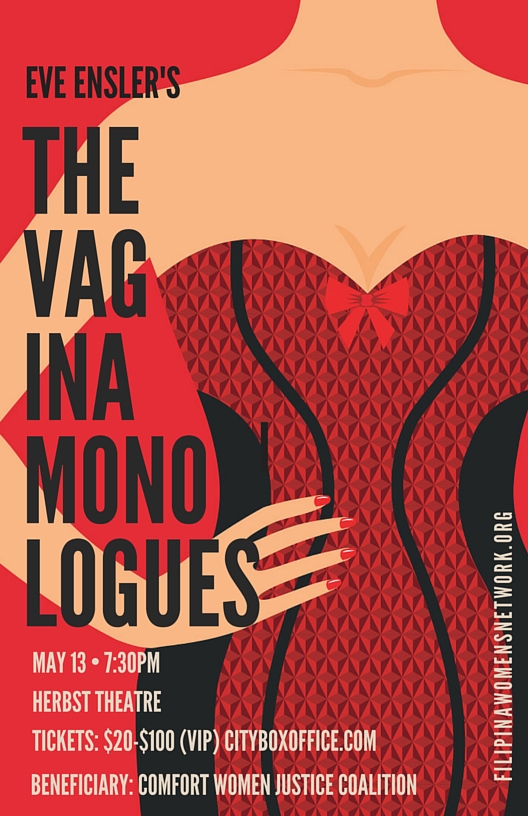 This is the ELEVENTH year that the Filipina Women’s Network has been fundraising to raise awareness about domestic abuse and end violence against women. This is from the FWN website:

Filipinas Against Violence is the Filipina Women’s Network’s annual anti-domestic violence campaign in collaboration with Eve Ensler’s V-Day organization to raise awareness through theatre, popular culture and education about the high incidence of violence in Asian homes and intimate partner relationships. Our mission is to encourage Filipina and Asian women in abusive relationships take action and seek help. Engaging the Filipino and Asian communities through the V-Day shows and hearing the women’s stories “hits home” and helps the Asian community understand the broader connections of Asian values such as respect for women, dignity, family, equality and justice to social and economic issues and to class and religion.

Why it’s important to raise awareness about violence against women

Here are some sobering facts on the Economics of Human Trafficking from Marylis Mondejar, one of the founders of this great campaign:

Come out and see a great show while supporting a great cause. Better yet, share this post with others and invite your friends!

Help me and other Vagina Warriors raise money for an important cause and make this year’s production of The Vagina Monologues a rockin’ success….