Can’t Talk About Race: I live in a city that is getting “whiter” and “whiter” by the day, in a neighborhood that is mostly White and Asian.

Because we live in a “progressive” city, folks around me talk in code words to avoid sounding racist but it is still very visible. People explain their reasons for not placing their kids in neighborhood public schools because there are “too many ‘project’ kids” read: too many poor black kids) or they “didn’t win the lottery to a ‘good school’ (read: they are not comfortable being a in a racial minority; there are not enough white kids/families). All this, and yet our schools in San Francisco continue to be blamed for being more segregated than ever. (#WellActually it’s the LOTTERY’s fault!)

I continue to bring up these conversations about race as it pertains to school choice and equitable access to high quality schooling. Nonetheless, I am growing more and more frustrated with attempts to address these issues with non-black folks who I consider to be my friends.

This article, titled I, Racist by John Metta captures my sentiments exactly:

“Living every single day with institutionalized racism and then having to argue its very existence, is tiring, and saddening, and angering. Yet if we express any emotion while talking about it, we’re tone policed, told we’re being angry. In fact, a key element in any racial argument in America is the Angry Black person, and racial discussions shut down when that person speaks. The Angry Black person invalidates any arguments about racism because they are “just being overly sensitive,” or “too emotional,” or– playing the race card. Or even worse, we’re told that we are being racist (Does any intelligent person actually believe a systematically oppressed demographic has the ability to oppress those in power?)

But here is the irony, here’s the thing that all the angry Black people know, and no calmly debating White people want to admit: The entire discussion of race in America centers around the protection of White feelings.

Ask any Black person and they’ll tell you the same thing. The reality of thousands of innocent people raped, shot, imprisoned, and systematically disenfranchised are less important than the suggestion that a single White person might be complicit in a racist system.” 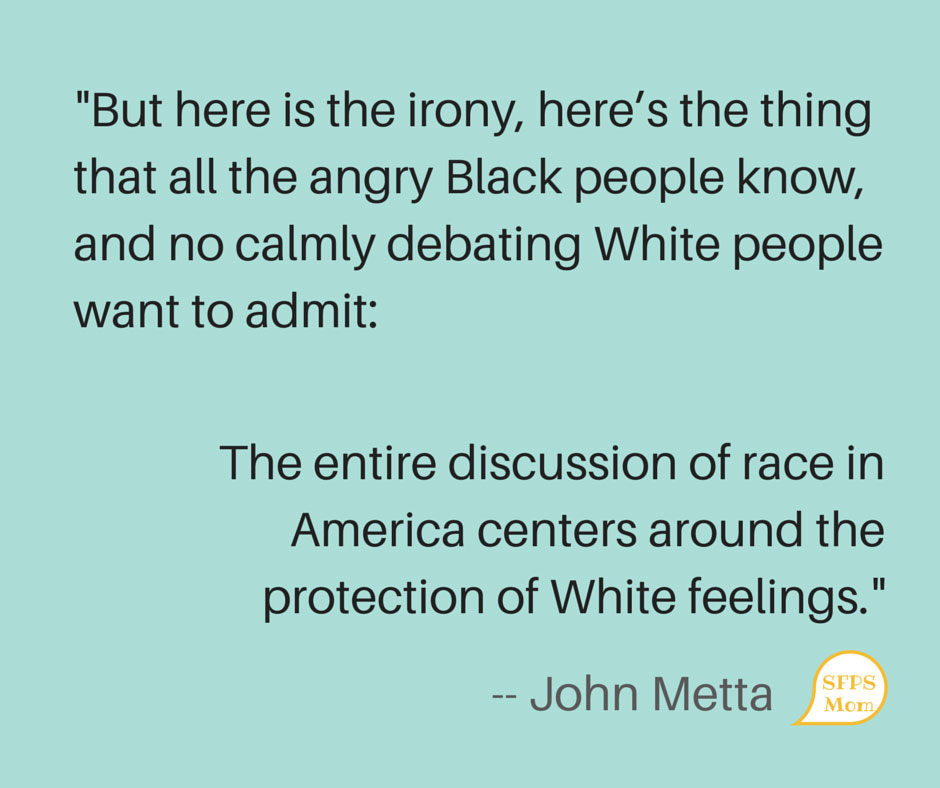 It’s not black folks’ job to fix racism. If it was, we’d have done fixed it already. (Don’t you think?) It’s up to all of us. Not talking about white supremacy, and white privilege … heck, not even being able to name the fact folks are white, is a HUGE problem in our schools, our city and our country.

Unfortunately, I am coming to feel like I can’t fix this problem. The fact that I am NOT-WHITE makes it impossible for me to say or do anything, because white fear and guilt is just too strong. (No one is listening.) It shouldn’t be my job to “talk in a nuanced way” or lighten things up with humor, or be patient. (That’s abdicating responsibility, making it my problem.) Kids, dads, mothers, father are literally DYING, children are being cheated out of an education, folks are being denied jobs and people want me and every other vocal black person to moderate our message???

Does any of this make sense to you? If you are White, (or Asian) how are you advancing the cause of social justice in your community or school? If you are Black, how do you deal with the Catch-22 of being either an “Angry Black” vs. staying silent?

“Why I Can’t Talk About Race in Schools with White “Friends” Related reads: