Why is the Teaching of Black History Optional?

It’s finally March. The end of Black History Month may officially be over, but I plan to keep it going ALL YEAR LONG!

Unfortunately, that’s not so in some schools and classrooms. Last month the SFUSD African-American Parent Advisory Council (AAPAC) made a survey request of all schools in the district to assess which schools were celebrating Black History Month. This was in response to reports that some schools “didn’t have the time”. (?!?) 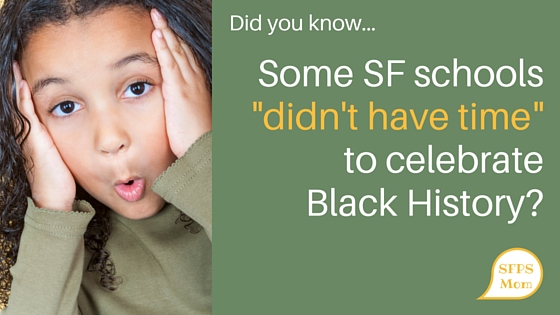 Jean Parker Elementary, my daughters’ school rocked it out the of park this year. Nonetheless, that was despite any support from the district. I’ve asked year after year and it is pretty much up to teachers and administrators to support Black History celebrations. This isn’t just about holding the schools “accountable” (which we should be doing.) It’s also about holding district staff accountable for supporting schools. Far too often, we expect classroom teachers to do all the heavy lifting. And, I have to say, the fact that my daughters’ teacher is willing to spend 7 hours a day with a room full of pre-tween goofballs (including my own!) is well worth some compassion for not covering EVERYTHING while nurturing them all in growing up to be caring, empathetic, culturally competent adults, don’t you think?

So, I’d suggest we ask lots of questions of our teachers, not only about what they are or aren’t doing to teach out kids the amazing histories of African-Americans (and other marginalized cultures), we should also be asking what kind of support they are getting in providing this kind of education to our kids. As far as I can tell, resources and support in this area are scant.

In fact, this has always been the case. The article below posted 10 years ago, and still I’m wondering… why is it OK for SF schools to do their own thing (or NOT) when it comes to Black History Month? Why aren’t there some standard experiences we expect all kids to have in relation to celebrating Black culture? Why aren’t there curriculum guides or resources?

In the wake of Lowell BSU student protest and subsequent demands for “mandatory” teaching of Ethnic studies, it seems like it’s well beyond time to ask: “Why is the celebration and teaching of Black History optional?”

Some members of San Francisco’s African-American community want the city’s school district to once again begin observing Black History Month in February, and to increase efforts to educate students throughout the school year about the significant contributions made by black Americans.

“[T]here is a tremendously important story to be told about black contributions to the life and development of San Francisco, California, and the United States,” David Wilson, the original plaintiff in a school desegregation case against the San Francisco Unified School District, wrote in a recent letter to U.S. District Judge William Alsup. The judge has been overseeing the case, which is coming to a close.

“The news that the district has excluded Black History Month, the presidentially proclaimed observance since 1976, from its academic calendar for 2005-2006,” Mr. Wilson wrote, “is a sign that you must use your authority over the welfare of African-American students to issue a temporary restraining order to prevent the continued exclusion of African-American content from the daily curriculum provided to all students in the district.”

Last May, several members of the city’s black community also presented the draft of a detailed policy to the school board that calls for the district to celebrate Black History Month and give greater attention to the contributions of African-Americans throughout the K-12 curriculum.

The proposal calls for 4th grade teachers to receive training on important moments in the history of the “black experience” in San Francisco and for schools and libraries to be equipped with “sufficient reference materials” on African-Americans.

But John William Templeton, an author and textbook publisher in the city, said the board has not taken any action on the proposal.

The draft policy has received support from the San Francisco Alliance of Black Educators, the National Council for Educating Black Students, and other groups.

It is the district’s practice to allow individual schools to choose how they commemorate special days, weeks, or months for cultural or ethnic groups, according to a spokesman for the district.

Mr. Templeton did receive an e-mail from school board President Eric Mar saying that he would recommend that Black History Month be added to the calendar and investigate the status of the proposed policy.

What do you think about this? What do you think Black families, community leaders and anti-racist allies should do to ensure kids of all races learn about the contributions of Black Americans to our history and culture?