What does hair have to do with school discipline?

Have you ever felt criminalized or excluded from an academic or professional setting because of your hair? Before you answer these questions… let’s back up a bit.

What does Black Hair have to do with school discipline?: Lets start from the beginning…

In May of 2014, SFUSD revised its hat policy allowing schools to establish their own policies around hats and head coverings. This was a soft way to dismantle a longstanding policy which disproportionately impacted students of color, and specifically Black students.

The “hat policy” is a great example of systemic racism which is about IMPACT not INTENT. While one would be hard-pressed to prove school administrators use school policies to intentionally target Black students. Nonetheless, the results have undeniably targeted Black, and to a lesser extent Muslim students, at higher rates.

As Matt Haney of the Board of Education stated at the time in an EdSource article he wrote:

“With the passage of the district’s new policy, students’ rights to wear a hat outdoors and for religious reasons will be protected, and school communities will have the opportunity to develop their own dress standards by taking into consideration the voices of students, parents and staff.

Teachers will no longer have to chase students around the hallways enforcing a hat ban simply because it is district policy, and we will ensure that students aren’t suspended or sent home for dress code violations.

Creating schools where students feel welcome and connected, where they can safely express their identity, is not a minor issue, particularly for our most vulnerable students.”

What does Black Hair have to do with school discipline?: Some positive changes…

Before the policy was adopted, students could be suspended or expelled for “willful defiance” if they refused to take hats off when asked to do so by staff. Thankfully, the district has removed “willful defiance” as a disciplinary classification because it was used to disproportionately suspend African-American students.

To provide a little context, in 2014 we saw a resurgence of political and social attention to the #BlackLivesMatter movement School to Prison Pipeline. Educators and social justice organizers were able to gain more visibility in speaking about the ways Black children are policed and criminalized in our communities and schools. Thus, the new policy which allowed school communities to set their own guidelines regarding dress policy was seen as progress toward more inclusive school practices.

Nonetheless, saying “You don’t have to discipline students for wearing hats,” isn’t the same thing as saying, “Schools can no longer discipline students for wearing hats.” Many educators and parents report that despite decided improvements at the high school level, many middle and elementary schools have continued to use hat policies to harass and criminalize Black students in our schools.

Why am I talking about this now?

I’m seeing the direct impact of this policy at my daughters’ school. Francisco Middle School, among others, is currently enforcing a hat policy. I have witnessed the ways this policy is CURRENTLY unfairly targeting Black and Latino students. These students may be 1.) more likely to wear hats for culture/style reasons, and 2) more unwilling to take hats off due to cultural reasons. (I’ll get into the second point later in this post.)

The fact that this continues to be an ongoing issue is very disheartening. Nonetheless, I can’t say I haven’t been complicit. To be fair, when I tried enforcing the hat policy as a teacher at Thurgood Marshall several years ago, I most often “got into it” with Black students. And this wasn’t because they were more often “defiant”, as one might think, but because Black boys and girls were more often affected by the rule.

This is where the policy language gets interesting. The new language in the SFUSD Student and Family Handbook regarding dress code reads:

“Schools may set their own policies relating to hats, caps and other head coverings, provided that any permitted head coverings may not be obscene or promote illegal activity.  There shall be no restriction on student head coverings worn for religious purpose; and students shall be permitted to wear head coverings in the schools’ outdoor spaces, as required by state law.”

It is interesting to note that while the 2014 change in policy outright protects students wearing headscarves for “religious reasons”, it stops short of explicitly prohibiting schools from disciplining students for wearing head coverings for cultural or economic reasons.

In case you are wondering what this all means… I’ll spell it out for you, in this case, “cultural” and economic reasons for wearing hats or headscarves in school most often apply to Black children.

What does Black Hair have to do with school discipline?: This is where the topic of hair comes in. 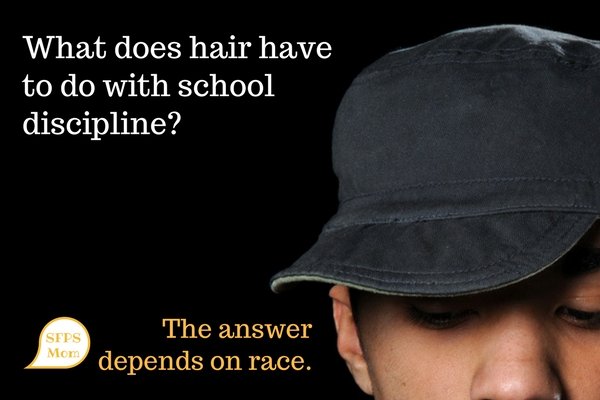 “What’s the big deal?” you may ask. “If kids don’t want conflict with school staff, why not just take off their hats?”

As I found out while trying to enforce the hat policy at Thurgood Marshall, hats and headscarves have a lot less to do with compliance vs. defiance and a lot more to do with the politics of Black hair.

Many of the low-income Black students told me they wore hats or scarves when their hair was not braided or styled. If students didn’t have the time or money to get their hair done, or if they weren’t lucky enough to have a friend who could do it for free, they might choose to defy the school hat policy, rather than come to school with unkempt hair. For some students, it was preferable to avoid school altogether than engage in conflict with school staff, or even worse, endure humiliation from their peers.

What does Black Hair have to do with school discipline?: The politics of Black hair

I have to be honest. I was blind to this reality for most of my life. As a mixed-race Black child, growing up in a majority Asian school community, I definitely had my own issues with “big” hair. Nonetheless, as a teenager I learned on a visit to extended family in St. Louis, that my hair was considered “good” by my Black cousins and their peers. Thus, my privilege as a light-skinned, middle-class Black girl meant any negative hair experiences I had literally pales in comparison to children who have been told by school administrators, fashion magazines and society in general that Black hair (like Black people) is a problem.

If you need proof, you only need to Google “black”,  “hair”, “student” and “school” to turn up a variety of articles detailing the ways Black children are criminalized based on their hair.  Or, watch this great clip in which Melissa Harris Perry breaks down the politics of Black hair:

What does Black Hair have to do with school discipline?: Why does SFUSD still allow students to be punished for wearing hats in school?

Thankfully, over the last three years, many schools have dropped this archaic and racist policy. Nonetheless, telling schools they “don’t have to enforce” a rule isn’t the same as telling them NOT to enforce it. According to some sources, most of our high schools have eliminated referrals for wearing hats indoors. Nonetheless, it is still prevalent in many middle schools and elementary schools.

We know the hat policy disproportionately impacts Black students. We know Black students already face an inordinate amount of bias and micro-aggressions in our schools. Research shows Black students are marginalized, criminalized and pushed out of our schools at higher rates than almost any other student subgroup.

Monique W. Morris is a researcher who writes and speaks about the over-policing of Black girls’ bodies. In her book, “Pushout: The Criminalization of Black Girls in Schools, she outlines the ways Black children, and specifically Black girls, are criminalized by “teachers and administrators, who discipline girls based on their clothes and adherence to dress codes.”

If there are any GOOD reasons for discriminatory policies agains Black students, (and there are none) I would certainly hope that hair is not one of them. “So,” I ask, “knowing all this, why are we still allowing ANY schools to enforce hat policies?”

Getting back to my original question: “Have you ever been told your hair is “bad”, “nappy”, “unprofessional”, or “distracting”? Have you ever felt criminalized or excluded from academic or professional settings because of it?”

“What does Black Hair have to do with school discipline?” Read more: