This Saturday, March  at 11 a.m. at George Washington High School, 600 32nd Ave, in Room 123 is a great opportunity to learn more about Black History in our city. This is a guest post from esteemed historian, John William Templeton, who according to an SFGate post:

“has titles ranging from technology expert to economic analyst, speaker to playwright, curator to filmmaker. But foremost, he is an expert on African American history. Templeton has spent years working on “Invisible Pioneers,” a report that describes the African American presence in San Francisco since 1770.

“The Hero of Bayview Hunters Point was Crispus Atticus…”

The hero of Bayview Hunters Point was Crispus Attucks, the first American to die for this country on March 5, 1770.   Ms. Ardith Nichols organized every block in the community under the Crispus Attucks Club from the late 1940s though the 1970s, in what the Ford Foundation called the most organized community in the country.  Crispus Attucks was the icon because he represented how deeply African-Americans belonged in the American narrative.

Those activists insisted the California Assembly enshrine his memory with “Black American Day, one of four education holidays in California, with a mandate to spend the entire day on the study of African-American contributions to America.

Instead, today our students in the most prestigious private and public schools see themselves reflected by their peers in the most degrading stereotypes.  In fact, nine of ten classrooms in the state can not put together an effective Black American Day program, not to mention a 29-day strategy for Black History Month. 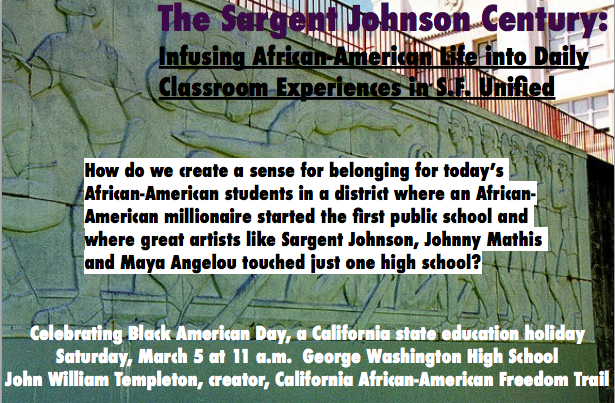 But the assets to change that are all around us in the California African-American Freedom Trail.  The Sargent Johnson Century: How to Infuse African-American Life into Classroom Experiences uses the largest piece of public art in San Francisco or at any of its schools as a point of departure atJoin him in learning more about our contributions of Black San Franciscans to our city and country’s great heritage this Saturday, March  at 11 a.m. at George Washington High School, 600 32nd Ave, in Room 123.<

Ms. Nichols and the block captains of the church-labor coalition that changed San Francisco politics understood that our students have to establish that they belong to the American and California narrative.  Without anyone telling them, today’s young people realize that isn’t happening.

We started the seven-week Come to the Water: Teaching California Black History” with the unknown story of how Martin Luther King Jr. spent his teen summers in San Francisco’s Western Addition.  That’s the kind of leadership our schools and communities can produce when the concept of belonging is clear. 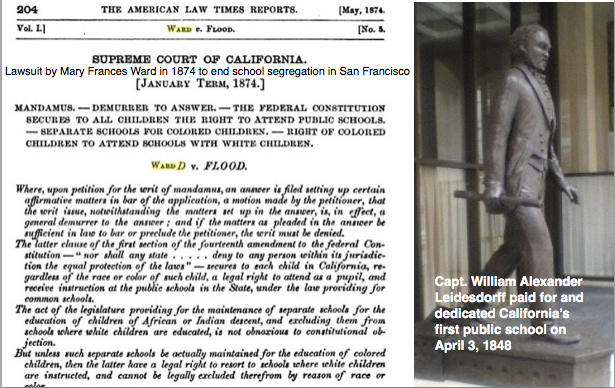 To help you understand the extensive history, order your copy of Come to the Water: Sharing the Rich Black Experience in San Francisco and the 25th anniversary edition of Our Roots Run Deep: the Black Experience in California, Vols. 1-4 which display the research we’ve put into creating the California African-American Freedom Trail, at californiablackhistory.com   We’ll also discuss our new title and television series Road to Ratification: How 27 States Tackled America’s Most Pressing Issue to get a template for how to discuss race in today’s life.

If you can’t make it, call 415-240-3537 so that every local student can get the kind of boost that young Martin Luther King Jr. got here.

MLK’s legacy was not about “dreaming”